The fourth main chapter provides an abstract description of digital signal transmission,  which is based on basis functions and signal space constellations.  This makes it possible to treat very different configurations – for example band-pass systems and those for the baseband – in a uniform way.  The optimal receiver in each case has the same structure in all cases.

The following are dealt with in detail:

Almost all results of this chapter have already been derived in previous sections.  However,  the approach is fundamentally new:

It should be noted that this rather global approach means that certain system deficiencies can only be recorded very imprecisely,  such as

In particular in the presence of intersymbol interference,  the procedure should therefore continue in accordance with the  third main chapter.


The description is based on the script  [KöZ08][1] by  Ralf Kötter  and  Georg Zeitler,  which is closely based on the textbook [WJ65][2]. Gerhard Kramer,  who has held the chair at the LNT since 2010,  treats the same topic with very similar nomenclature in his lecture [Kra17][3].  In order not to make reading unnecessarily difficult for our own students at TU Munich,  we stick to this nomenclature as far as possible,  even if it deviates from other  $\rm LNTwww$  chapters.

Nomenclature in the fourth chapter

Compared to the other  $\rm LNTwww$  chapters,  the following nomenclature changes arise here:

For what follows,  we further assume that the  $M$ signals  $s_i(t)$  are  "energy-limited",  which usually means at the same time that they are of finite duration.

Here,  the parameter  $N$  indicates how many basis functions  $\varphi_j(t)$  are needed to represent the  $M$  possible transmitted signals.  In other words:   $N$  is the  "dimension of the vector space"  spanned by the  $M$  signals.  Here,  the following holds:

$\text{Example 1:}$  We consider  $M = 3$  energy-limited signals according to the graph.  One recognizes immediately: 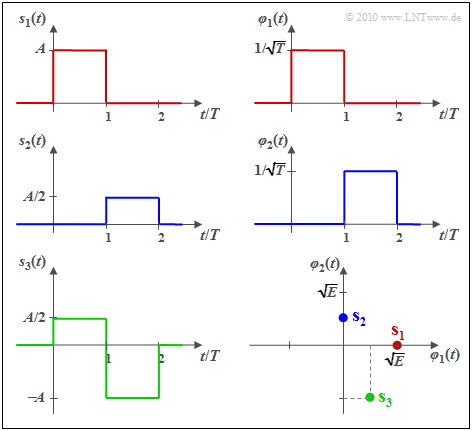 ⇒   In the lower right image,  the signals are shown in a two-dimensional representation 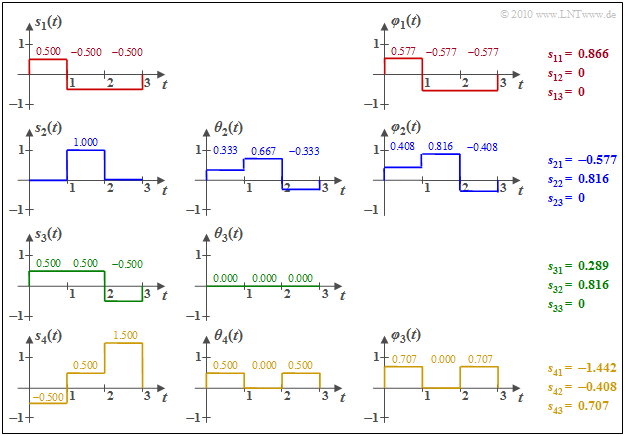 One can see from these sketches:

In Communications Engineering,  one often has to deal with complex time functions,

The determination of the  $N \le M$  complex-valued basis functions  $\xi_k(t)$  from the  $M$  complex signals  $s_i(t)$  can also be done using the  "Gram–Schmidt process",  but it must now be taken into account that the inner product of two complex signals  $x(t)$  and  $y(t)$  must be calculated as follows:

Of course,  any complex quantity can also be expressed by two real quantities,  namely real part and imaginary part.  Thus,  the following equations are obtained here:

Dimension of the basis functions

In baseband transmission, the possible transmitted signals  $($considering only one symbol duration$)$  are

where  $g_s(t)$  indicates the  "basic transmission pulse"  and the  $a_i$  were denoted in the first three main chapters as the possible  "amplitude coefficients".  It should be noted that from now on the values  $0$  to  $M-1$  are assumed for the indexing variable  $i$.


According to the description of this chapter,  this is a one-dimensional modulation process  $(N = 1)$,  regardless of the level number  $M$.

$\text{In the case of baseband transmission:}$ 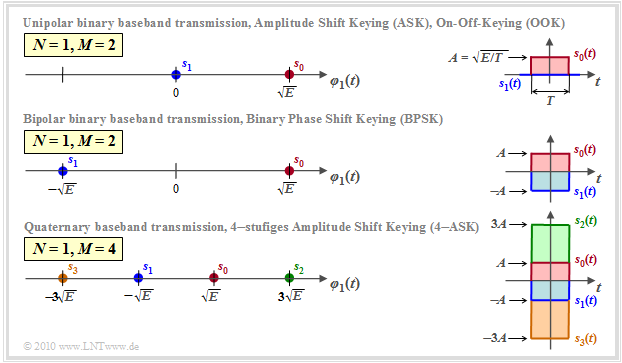 $\text{Example 4:}$ The two-dimensional modulation processes include:

The graph describes two-dimensional modulation processes in the band-pass  (left)  and in the equivalent low-pass range  (right):

Exercise 4.1: About the Gram-Schmidt Method