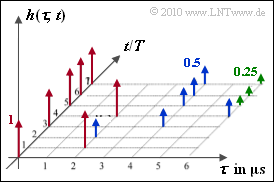 is to be analyzed according to the adjoining diagram.  The two axes are time-discrete:

When measuring the impulse responses at different times  $t$  at intervals of one second, the resolution of the  $\tau$–axis was two microseconds $(\delta \tau = 2 \ \rm µ s)$.  The echoes were not localized more precisely.

In this task the following quantities are also referred to: