Optimization criterion of the Wiener-Kolmogorow filter

As another example of optimal filtering, we now consider the task of reconstructing as well as possible the shape of an useful signal  $s(t)$  from the reception signal  $r(t)$,  which is disturbed by additive noise  $n(t)$,  in terms of the  "mean square error"  (MSE):

The filter is named after its inventors  Norbert Wiener  and  Andrei Nikolajewitsch Kolmogorow.  We denote the corresponding frequency response by  $H_{\rm WF}(f).$

Derivation of the Wiener filter

The following conditions apply to this optimization task:

Result of the filter optimization

$\text{Here without proof:}$  The  transmission function of the optimal filter  can be determined by the so-called  "Wiener-Hopf integral equation",  and is:

The mathematical derivation of the equation is omitted.  Rather, this filter shall be clarified and interpreted in the following on the basis of some special cases.

Interpretation of the Wiener filter

Now we will illustrate the Wiener-Kolmogorov filter with two examples.

This example has dealt with a special case where the best possible result  $\rm MSE = 0$  would be possible, at least theoretically.  The following example makes more realistic assumptions and gives the result  $\rm MSE > 0$. 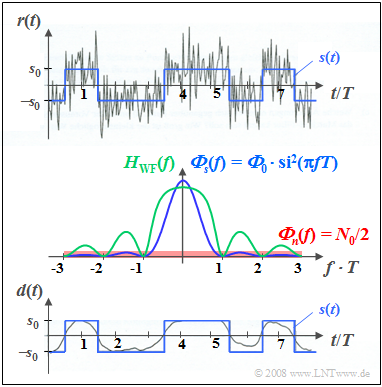 Signals at the Wiener filter

The diagram contains the following plots:

(4)   These components are filtered out in favor of a better noise suppression of these frequencies.

Under these conditions, no other filter yields a smaller (mean square) error than the Wiener filter.

Its frequency response (green curve) is as follows:

From the central plot you can see further:

Exercise for the chapter

Exercise 5.9: Minimization of the MSE