Text with erasures or errors

In the early 1950s,  Claude E. Shannon  estimated the entropy  $H$  of the English language at one bit per character.  A short time later,  Karl Küpfmüller  arrived at an entropy value of  $H =1.3\ \rm bit/character$, i.e. a somewhat larger value, in an empirical study of the German language.  Interestingly, the results of Shannon and Küpfmüller are based on two completely different methods.

The differing results cannot be explained by the small differences in the range of symbols  $M$ :

Both made no distinction between upper and lower case.

This task is intended to show how

have an effect on the comprehensibility of a text.  Our text also contains the typical German letters "ä",  "ö",  "ü"  and  "ß"  as well as numbers and punctuation. In addition, a distinction is made between upper and lower case.

In the figure, a text dealing with Küpfmüller's approach is divided into six blocks of length between  $N = 197$  and  $N = 319$  aufgeteilt.  Described is the check of his  first analysis  in a completely different way, which led to the result  $H =1.51\ \rm bit/character$ .

The influence of such character errors on the readability of a text is to be compared in subtask  (4)  with the second block (outlined in red), for which the probability of an erasure is also  $20\%$ .

(1)  The symbol range in Küpfmüller's investigations was  $\underline{M = 26}$,  because, in contrast to Shannon, he did not initially take the space into account.

In the given German text of this task, the symbol range is significantly larger,

(3)  Only the first suggested solution is correct: 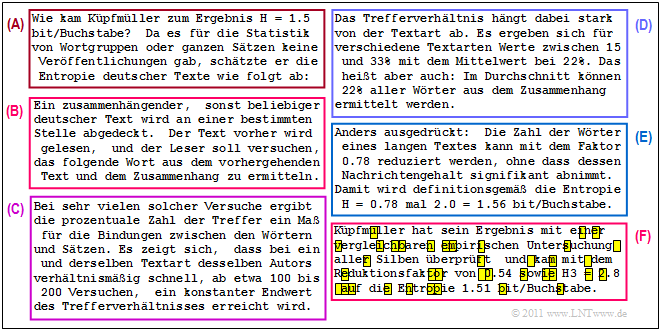 Finally, the original text is given, which is only reproduced on the information page distorted by erasures or real character errors.