Difficulties with the determination of entropy

Up to now, we have been dealing exclusively with artificially generated symbol sequences.  Now we consider written texts.  Such a text can be seen as a natural discrete message source, which of course can also be analyzed information-theoretically by determining its entropy.

Even today (2011), natural texts are still often represented with the 8 bit character set according to ANSI ("American National Standard Institute"), although there are several "more modern" encodings;

Theoretically, one could also define the entropy here as the border crossing point of the entropy approximation  $H_k$  for  $k \to \infty$,  according to the procedure from the  last chapter.  In practice, however, insurmountable numerical limitations can be found here as well:

A justified question is therefore:   How did  Karl Küpfmüller  determined the entropy of the German language in 1954?  How did  Claude Elwood Shannon  do the same for the English language, even before Küpfmüller?  One thing is revealed beforehand:   Not with the approach described above.

Entropy estimation according to Küpfmüller

Karl Küpfmüller has investigated the entropy of German texts in his published assessment   [Küpf54][1]  the following assumptions are made:

Küpfmueller's estimation is based on the following considerations:

(2)  Regarding the  syllable frequency  Küpfmüller evaluates the  "Häufigkeitswörterbuch der deutschen Sprache"  (Frequency Dictionary of the German Language), published by  Friedrich Wilhelm Kaeding  in 1898.  He distinguishes between root syllables, prefixes, and final syllables and thus arrives at the average information content of all syllables:

(3)  As average number of letters per syllable Küpfmüller determined the value  $3.03$.  From this he deduced the  third entropy approximation'  regarding the letters: 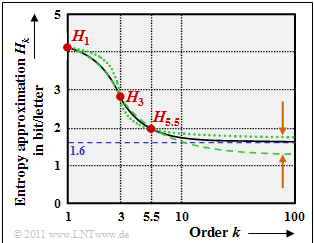 (7)  Küpfmüller then tried to verify the final value  $H = 1.6 \ \rm bit/letter$  found by him with this first estimation with a completely different methodology - see next section. After this estimation he revised his result slightly to

(8)  Three years earlier, after a completely different approach, Claude E. Shannon had given the entropy value  $H ≈ 1 \ \rm bit/letter$  for the English language, but taking into account the space character.  In order to be able to compare his results with Shannom, Küpfmüller subsequently included the space character in his result.

A further entropy estimation by Küpfmüller

For the sake of completeness, Küpfmüller's considerations are presented here, which led him to the final result  $H = 1.51 \ \rm bit/letter$.    Since there was no documentation for the statistics of word groups or whole sentences, he estimated the entropy value of the German language as follows:

The remarks on this and the previous page, which may be perceived as very critical, are not intended to diminish the importance of neither Küpfmüller's entropy estimation, nor Shannon's contributions to the same topic.

Some own simulation results

Karl Küpfmüller's data regarding the entropy of the German language will now be compared with some (very simple) simulation results that were worked out by the author of this chapter (Günter Söder) at the Department of Communications Engineering at the Technical University of Munich as part of an internship for students.  The results are based on the German Bible in ASCII format with  $N \approx 4.37 \cdot 10^6$  characters. This corresponds to a book with  $1300$  pages at  $42$  lines per page and  $80$  characters per line.

The following table summarizes the results:   $N$  indicates the analyzed file size in characters (bytes).   The decision content  $H_0$  as well as the entropy approximations  $H_1$,  $H_2$  and  $H_3$  were each determined from  $N$  characters and are each given in "bit/characters".

Entropy values  (in bit/characters)  of the German Bible

The results of the above table can be summarized as follows:

Although we consider this own study to be rather insignificant, we believe that for today's texts the  $1.0 \ \rm bit/character$  given by Shannon are somewhat too low for the English language and also Küpfmüllers  $1.3 \ \rm bit/character$  for the German language, among other things because:

The graphic shows artificially generated German and English texts, which are taken from  [Küpf54][1].  The underlying symbol set size is  $M = 27$,  that means, all letters  (without umlauts and  ß)  and the space character are considered. 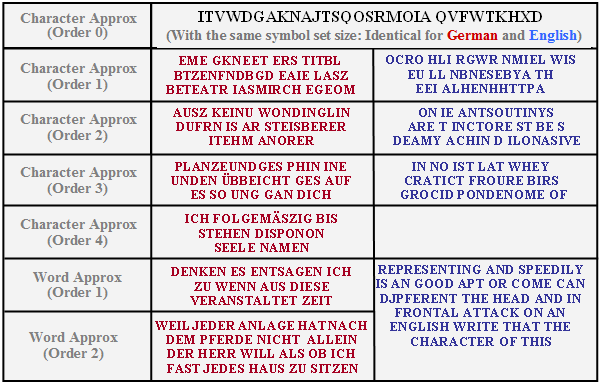 Further information on the synthetic generation of German and English texts can be found in the  Exercise 1.8.