Shannon's Information Theory is applied, for example, in the  Source coding of digital  (i.e. discrete and discrete-time)  message sources.  In this context, one also speaks of  Data compression.

The following is a detailed discussion:

For the descriptions in this second chapter we consider the following model of a digital transmission system:

As can be seen from this block diagram, there are three different types of coding, depending on the target direction.  Each of which is realized by the  "encoder"  on the transmission side and the corresponding  "decoder"  at the receiver:

Task of the  source coding  is the reduction of redundancy for data compression, as it is used for example in image coding.  By using correlations between the individual points of an image or between the brightness values of a pixel at different times  (for moving picture sequences)  procedures can be developed which lead to a noticeable reduction of the amount of data (measured in bit or byte) with nearly the same picture quality.  A simple example is the  »differential pulse code modulation«  (DPCM).

With  channel coding  on the other hand, a noticeable improvement of the transmission behavior is achieved by using a redundancy specifically added at the transmitter to detect and correct transmission errors at the receiver side.  Such codes, whose most important representatives are  »block codes«,  »convolutional codes«  and  »turbo codes«,  are of great importance, especially for heavily disturbed channels.  The greater the relative redundancy of the coded signal, the better the correction properties of the code, but at a reduced payload data rate.

Line coding  is used to adapt the transmission signal  $x(t)$  to the spectral characteristics of the channel and the receiving equipment by recoding the source symbols.   For example, in the case of an  (analog)  transmission channel over which no direct signal can be transmitted, for which thus  $H_{\rm K}(f = 0) = 0$, it must be ensured by line coding that the encoded sequence does not contain long sequences of the same polarity.

The focus of this chapter is on lossless source coding, which generates a data-compressed encoded sequence  $〈c_ν〉$  starting from the source symbol sequence  $〈q_ν〉$  and based on the results of information theory.

For digitizing analog source signals such as speech, music or pictures, only lossy source coding methods can be used.  Even the storage of a photo in  BMP  format is always associated with a loss of information due to sampling, quantization and the finite color depth.

However, there are also a number of compression methods for images that result in much smaller image files than  "BMP", for example:

These compression methods partly use

We now compare the effects of two compression methods on the subjective quality of photos and graphics, namely:

$\text{Example 1:}$  In the upper part of the graphic you can see two compressions of a photo. 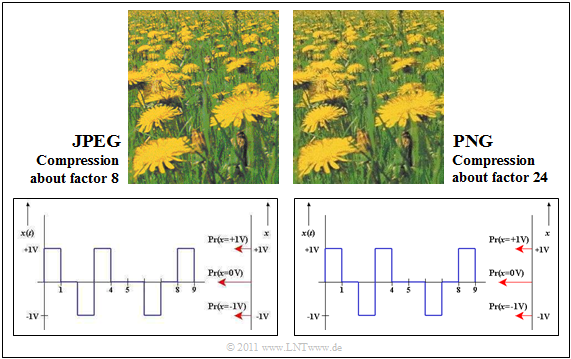 The image shown on the right was compressed with  $\rm PNG$.

PNG is also better suited for line drawings with captions than JPEG (compare the lower images).

Note:   Due to technical limitations of  $\rm LNTww$  all graphics had to be saved as  "PNG".

A first example of source coding for speech and music is the  pulse-code modulation  $\rm (PCM)$, invented in 1938, which extracts the encoded sequence  $〈c_ν〉 $ from an analog source signal  $q(t)$, corresponding to the three processing blocks 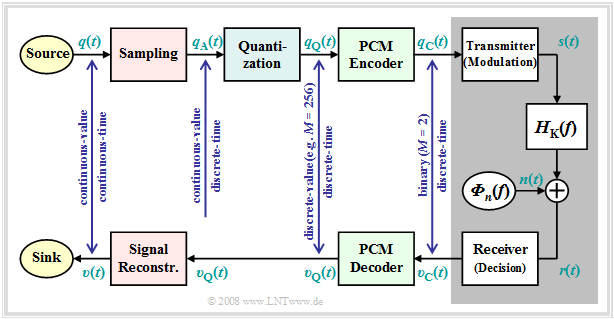 The graphic illustrates the PCM principle.  A detailed description of the picture can be found on the first pages of the chapter  Pulse-code modulation  in the book  "Modulation Methods".

Because of the necessary band limitation and quantization, this transformation is always lossy.  That means

We will now mention two transmission methods based on pulse code modulation as examples.

$\text{Example 2:}$  The following data is taken from the  GSM specification:

In mobile communications, very high data rates often could not (yet) be handled.  In the 1990s, voice coding procedures were developed that led to data compression by the factor  $8$  and more.  From today's point of view, it is worth mentioning:

All these compression methods are described in detail in the chapter  Voice Coding  of the book "Examples of Communication Systems"   The (German language) audio module  "Qualität verschiedener Sprach-Codecs"   ⇒   "Quality of different voice codecs"  allows a subjective comparison of these codecs.

Today (2015) the most common compression method for audio files is  MP3.  This format was developed from 1982 on at the Fraunhofer Institute for Integrated Circuits (IIS) in Erlangen under the direction of Professor  Hans-Georg Musmann  in collaboration with the Friedrich Alexander University Erlangen-Nuremberg and AT&T Bell Labs.  Other institutions are also asserting patent claims in this regard, so that since 1998 various lawsuits have been filed which, to the authors' knowledge, have not yet been finally concluded.

In the following some measures are called, which are used with  "MP3", in order to reduce the data quantity in relation to the raw version in the  "wav"-format.  The compilation is not complete.  A comprehensive representation about this can be found for example in a  Wikipedia article.

A disadvantage of the MP3 coding is that with strong compression also  "important"  frequency components are unintentionally captured and thus audible errors occur.  Furthermore it is disturbing that due to the blockwise application of the MP3 procedure gaps can occur at the end of a file.  A remedy is the use of the so-called  "LAME coder"  and a corresponding player.

Binary codes for compressing a memoryless discrete source are characterized by the fact that the individual symbols are represented by encoded sequences of different lengths:

Only then it is possible,

To enable a unique decoding, the code must also be "prefix-free".

$\text{Definition:}$  The property  prefix-free  indicates that no code word may be the prefix (beginning) of a longer code word.  Such a code word is immediately decodable.

$\text{Without proof:}$  The necessary  condition for the existence of a prefix-free code  was specified by Leon Kraft in his Master Thesis 1949 at the  Massachusetts Institute of Technology  (MIT):

it is obviously not prefix-free.  The equation

does not mean that this code is actually prefix-free, it just means that there is a prefix-free code with the same length distribution, for example

A source encoder replaces the source symbol  $q_μ$  with the code word  $\mathcal{C}(q_μ)$, consisting of  $L_μ$  binary symbols (zeros or ones).  This results in an average code word length:

For the source encoding task described here the following requirement can be specified:

$\text{Theorem:}$  For the possibility of a complete reconstruction of the sent string from the binary sequence it is sufficient, but also necessary, that for encoding on the transmitting side at least  $H$  binary symbols per source symbol are used.

$\text{Example 7:}$  For a quaternary source with the symbol probabilities

equality in the above equation   ⇒   $L_{\rm M} = H$ results, if for example the following assignment is chosen:

In contrast, with the same mapping and

Because of the unfavorably chosen symbol probabilities (no powers of two)  ⇒   $L_{\rm M} > H$.

Character encodings according to Bacon/Bandot, Morse and Huffman

$\text{Example 8:}$  We will look at some very early attempts at source encoding for the transmission of natural texts, based on the letter frequencies given in the table.

Please note the following about this table:

Exercise 2.1: Coding with and without Loss