Exercise 3.1: Development of the Mobile Network 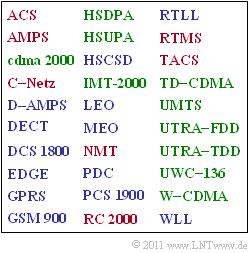 First mobile communication systems came onto the market in the mid to late 1950s, in Germany for example the "A–Netz".

However, the devices of that time cannot be compared with today's mobile phones in any way, either in terms of performance, volume or even more so in terms of weight.

Since the early 1980s, the development of mobile communications technology has progressed rapidly.  Approximately every ten years, there have been significant changes in technology, performance and the services offered.

The fourth generation  $\rm LTE$   (Long Term Evolution)  of mobile communications was specified in 2008 with UMTS Release 8 and has also been available in Germany since around 2013, although it is not yet available nationwide today (2017).