This chapter provides an overview of  Long Term Evolution  $\rm (LTE)$.  From today's perspective (2011), LTE is a new mobile communications standard that should replace UMTS and will probably continue to shape the next few years of mobile voice and data transmission.

In the following, a rough overview of the motivation, functionality and characteristics of LTE is given.  This is followed by a more detailed system description of the technical processes involved in LTE.  This chapter will deal with this in detail:

Addendum:   The LTE chapter was written in 2011, i.e. at the time when LTE had just been introduced.  During the last editorial revision in autumn 2017, some earlier statements were revised which no longer corresponded to the facts after six years of intensive use by many customers.  However, most of the chapter remained unchanged compared to 2011, as the LTE principle has not changed in the meantime.

Development of mobile users until 2010 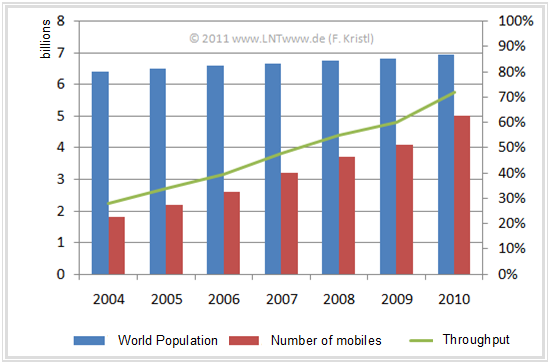 Since the turn of the millennium, the number of mobile connections has increased dramatically.

The following statements refer to the year 2010:

The abbreviation  $\rm LTE$  stands for  "Long Term Evolution"  and refers to the mobile communications standard that follows UMTS.  The new conceptual development of LTE was intended to satisfy the ever-increasing demand for bandwidth and higher speeds over the long time  ("Long Term").

The LTE standard was first defined in 2008 as  "UMTS Release 8"  by the  $\rm 3GPP$  (Third Generation Partnership Project), a conglomerate of various international telecommunication associations, and has since been continuously developed further by so-called "Releases".  The commitment of the world's largest mobile communications providers has made LTE the first (largely) uniform standard for mobile communications technology.


According to  "UMTS Release 8", LTE is also called  $\rm 3.9G$  because it initially did not fully meet the conditions specified by the ITU  (International Telecommunication Union)  for fourth generation  $\rm (4G)$  mobile communications.

In contrast, the subsequent Release 10  (dated July 2011)  complies with the  $\rm 4G$ standard.  The chapter  LTE Advanced  lists the features of this LTE enhancement.  This technology is also referred to as  $\rm LTE–A$.


Here is a summary of the important system features of LTE from the page  ITWissen :

Motivation and goals of LTE

In 2010, the American telecommunications company  "Cisco Systems"  published a  White Paper  which assumes that in 2015

Graphic from the Ericsson Mobility Report 2015

It has also been predicted that five billion people will be connected to the Internet in 2015  [HT09][1].  In addition, other wireless transmission technologies are being developed at the same time, which promise equally high data transmission rates.  All these factors called for further development of the 3GPP mobile communications standard "UMTS".

The 3GPP consortium started early to define the LTE targets to keep up with the rapid development of line-based connections.  The exact targets were then set out in the  "LTE Release 6"  compared to  $\rm HSPA$  technology  ("High–Speed Packet Access")  at the end of 2004.

The main goals were mentioned:

Compared to HSPA, this means an increase in spectral efficiency by a factor of  $2 \ \text{...}\ 4$  and a reduction in latency by half and a tenfold increase in the maximum data rate.  The individual points, which represent a large part of the LTE specific technical characteristics, are described in more detail in the chapter  "Technical Innovations of LTE".

Development of the UMTS mobile phone standards towards LTE

First of all, a brief overview of UMTS releases before LTE from  [Hin08][2]:

The  Release 8  of December 2008 was synonymous with the introduction of  "Long Term Evolution"  $\rm (LTE)$ and the basis for the first generation of LTE capable terminals.  The main innovations and characteristics of Release 8, summarized by  3gpp  (Third Generation Partnership Project), were:

These features (and some others more) are discussed in detail in the section  Technical innovations of LTE . 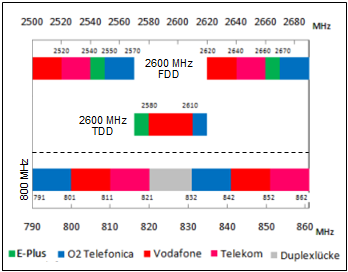 New frequencies were needed for LTE. In Germany, there was an auction of two frequency ranges in 2010, in which all German mobile network operators took part.

The chart illustrates the results of this auction of frequencies in

More about the difference between FDD and TDD can be found in section  Motivation for xDSL  in the book "Examples of communication systems".

The two auctioned frequency ranges have different system characteristics, which make them interesting for different applications.

The difference in importance of the frequency ranges from the operator's perspective is clearly illustrated by the results of the 2010 frequency auction:

On the last pages the  "Third Generation Partnership Project"  $($or short $\rm 3GPP)$  has been mentioned several times.  Here is a short overview of the self-image of this group, its structure and its activities.  The information is taken directly from the  3GPP Website.

3GPP is a group of various international standardization organizations that have joined forces for the purpose of standardizing mobile radio systems.  It was founded in December 1998 by five partners:

The 3GPP develops, accepts and maintains a globally applicable standard in mobile communications.  The conferences, which are held regularly and frequently, are the most important bodies in the updating of the standardization of the technical specifications of LTE.

In  [Gut10][3]  the following assessment can be found:
"The goal of 3GPP standardization is the creation of technical specifications  $\rm (TS)$  that describe all technical details of a mobile communications technology in detail.  The specifications for LTE are extremely comprehensive.  The level of detail is chosen so high that mobile devices from different manufacturers can function without problems in all networks".