For speech transmission with LTE


The problem of integrating speech transmission methods was one of the major challenges in the development of LTE, as speech transmission remains the largest source of revenue for network operators.  There were a number of approaches, as it can be seen in the internet article   [Gut10][1]

(1)   A very simple and obvious method is  "Circuit Switched Fallback"  $\rm (CSFB)$.  Here a wireline transmission is used for the speech transmission.  The principle is:

(2)   Another possibility for the integration of speech/voice in a packet-oriented transmission system is offered by  "Voice over LTE via GAN"  $\rm (VoLGA)$, which is based on the from  3GPP  developed by  Generic Access Network.  In brief, the principle can be described as follows:

Even though VoLGA does not need to use a GSM or UMTS network for voice connections like CSFB, it was considered by the majority of the mobile community as an (unsatisfactory) bridge technology due to its user-friendliness.  T–Mobile has long been a proponent of the VoLGA technology, but they also stopped further development in February 2011.


In the following we describe a better solution proposal.  Keywords are  "IP Multimedia Subsystem"  $\rm (IMS)$  and  "Voice over LTE"  $\rm (VoLTE)$.  The operators in Germany switched to this technology relatively late:   Vodafone and O2 Telefonica at the beginning of 2015, Telekom at the beginning of 2016.

This is also the reason why the switch to LTE in Germany  (and in Europe in general)  was slower than in the US.  Many customers did not want to pay the higher prices for LTE as long as there was no well functioning solution for integrating voice transmission.

From today's point of view (2016), the most promising approach to integrating voice services into the LTE network, some of which are already established, is  "Voice over LTE"  $\rm (VoLTE)$.  This standard, officially adopted by the  $\rm GSMA$,  the worldwide industry association of more than 800 mobile network operators and over 200 manufacturers of cell phones and network infrastructure, is exclusively IP packet-oriented and is based on the  "IP Multimedia Subsystem"  $\rm (IMS)$, which was already defined in the UMTS Release 9 in 2010.

The technical facts about IMS are:

The reason why the introduction of  VoLTE  has been delayed by four years compared to LTE establishment in data traffic is due to the difficult interaction of "4G" with the older predecessor standards  GSM  ("2G") and  UMTS  ("3G").  Here is an example:

According to all the experts, VoLTE will have a positive impact on mobile telephony in the same way that LTE has driven the mobile Internet forward since 2011.  Key benefits for users are:

From the provider's point of view, the following advantages result:

In order to keep the complexity and effort of hardware standardization as low as possible, a whole range of permissible bandwidths between 1.4 MHz and 20 MHz has been agreed upon. The following list – taken from  [Ges08][3]  – specifies the standardized bandwidths, the number of available blocks and the "overhead":

Since otherwise some LTE specific functions would not work, at least six blocks must be provided.

Such duplexing is necessary to ensure that uplink and downlink are clearly separated from each other and that transmission runs smoothly.  The diagram illustrates the difference between FDD based and TDD based transmission.


Using the FDD and TDD methods, LTE can be operated in paired and unpaired frequency ranges. The two methods are present opposing requirements:

In the graphic above the differences between FDD and TDD can be seen. In TDD a  "Guard Period"  has to be inserted when changing from downlink to uplink (or vice versa) to avoid an overlapping of the signals.


Although FDD is likely to be used more in practice  (and FDD frequencies were much more expensive for the providers), there are several reasons for TDD:

For the actual innovation, the  $\text{half–duplex}$  method, you need a paired spectrum as with FDD  (see the folloing graphic):

The fact that this aspect was of great importance in the standardization can also be seen in the use of  "OFDMA"  in the downlink and of  "SC–FDMA"  in the uplink:

If a radio system uses several transmitting and receiving antennas, one speaks of  $\text{Multiple Input Multiple Output}$  $\rm (MIMO)$.  This is not an LTE specific development.  WLAN, for example, also uses this technology.

$\text{Example 1:}$  The principle of multiple antenna systems is illustrated in the following graphic using the example of 2×2–MIMO (two transmitting and two receiving antennas).

The difference between SISO and MIMO

A MIMO system has advantages compared to  "Single Input Single Output"  (SISO, only one transmitting and one receiving antenna).  A distinction is made between several gains depending on the channel:

However, it is not possible for all advantages to occur simultaneously.  Depending on the nature of the channel, it can also happen that one does not even have the choice of which advantage one wants to use.


In addition to the MIMO systems there are also the following intermediate stages:

$\text{Example 2:}$  The term  "MIMO"  summarizes multi-antenna techniques with different properties, each of which can be useful in certain situations.  The following description is based on the four diagrams shown here. 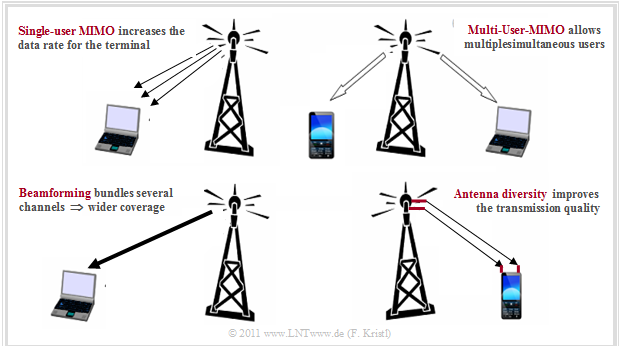 LTE allows maximum 4×4 MIMO but only in the downlink.  Due to the complexity of multi-antenna systems, only laptops with LTE modems can be used as receivers (end devices) for 4×4 MIMO.  For a mobile phone, the use is generally limited to 2×2 MIMO.

This involves transmitting different data streams to different users.  This is particularly useful in places with high demand, such as airports or soccer stadiums.

A simple example:   There are four channels that all transmit the same data.  If one channel fails, there are still three channels for information transport.

The LTE architecture enables a transmission system based entirely on the IP protocol.  In order to achieve this goal, the system architecture specified for UMTS not only had to be changed in detail, but in some cases completely redesigned.  In the process, other IP based technologies such as  "mobile WiMAX"  or  "WLAN"  were also integrated in order to be able to switch to these networks without any problems.

In UMTS networks (left graphic), the  "Radio Network Controller"  $\rm (RNC)$  is inserted between a base station ("NodeB") and the core network, which is mainly responsible for switching between different cells and which can lead to latency times of up to 100 milliseconds.

The  $\text{LTE system architecture}$  can be divided into two major areas, too:

The LTE core network  "Evolved Packet Core"  $\rm (EPC)$  of a network operator  (in the technical language  "Backbone")  consists of various network components.  The EPC is connected to the base stations via the  "Backhaul".  This means the connection of an upstream, usually hierarchically subordinated network node to a central network node.


Currently, the  "Backhaul"  consists mainly of directional radio and so-called  "E1" lines.  These are copper lines and allow a throughput of about 2 Mbit/s.  For GSM and UMTS networks these connections were still sufficient, however, for the large-scale conceived  $\rm HSDPA$  such data rates are no longer adequate.  For LTE such a  "Backhaul"  is completely unusable:

In the course of the introduction of LTE, the backhaul had to be redesigned.  It was important to keep an eye on future security, since the next generation  "LTE Advanced"  was already in place before the introduction.  If one believes the experts' propaganda  "Moore's Law" for mobile phone bandwidths, the most important factor for future security is the expensive new installation of better cables.


Due to the purely packet-oriented transmission technology, the Ethernet standard, which is also IP based, is suitable for the LTE backhaul, which is realized with the help of optical fibers.  In 2009, the company Fujitsu presented in the study  [Fuj09][4],  also the thesis that the current infrastructure will continue to play an important role for LTE backhaul for the next ten to fifteen years.


There are two approaches for the generation change to an Ethernet based  backhaul :

The former would have the advantage that the network operators could continue to run voice traffic over the old lines and would only have to handle bandwidth-intensive data traffic over the more powerful lines.

For conurbations, a direct conversion of the backhaul would certainly be worthwhile, as relatively few new cables would have to be laid for a comparatively high number of new users.

In rural areas, however, major excavation work would quickly result in high costs.  However, this is exactly the area which must be covered first, according to the  agreement reached  between the federal government and the (German) mobile phone operators.  Here, the mostly existing microwave radio link would have to be (and probably will be) extended to high data rates.