The Application of OFDMA and SC-FDMA in LTE


In principle, it would have been possible to adapt and expand the technologies used in the second and third generations of mobile communications in such a way that they also meet the required specifications for the fourth generation.  However, the rapidly increasing complexity of CDMA when receiving signals on multiple paths made the technical implementation appear to make little sense.


The highly abstracted graphic shows the distribution of the complete bandwidth for individual subcarriers and explains the difference between  $\rm CDMA$  (UMTS) and  $\rm OFDM$  (LTE).

Difference between OFDM and CDMA

LTE uses  $\rm OFDMA$, an OFDM based transmission technology.  Among the reasons for this are  [HT09][1]:

On the next page the differences between the multiple access methods "OFDM" and "OFDMA" are briefly explained.

Similarities and differences of OFDM and OFDMA

The principle of  "Orthogonal Frequency Division Multiplexing" is explained in detail in chapter  Motivation for xDSL  of the book "Examples of Communication Systems". 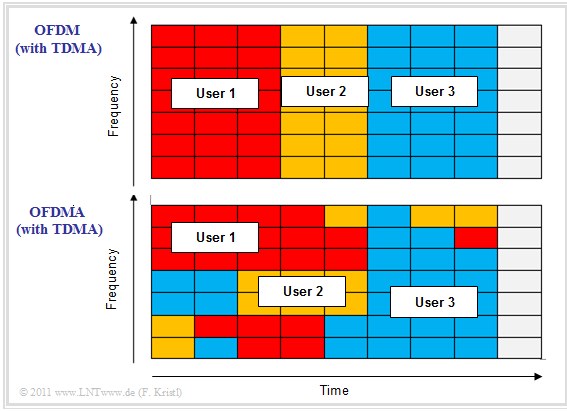 The upper diagram shows the frequency assignment for  $\rm OFDM$:  This method splits the available frequency band into a large number of narrow–band subcarriers.  It is important to note:

Differences between OFDMA and SC-FDMA

There are transmission methods such as  WiMAX, which use OFDMA in both directions.  The LTE specification by the 3GPP consortium on the other hand specifies: 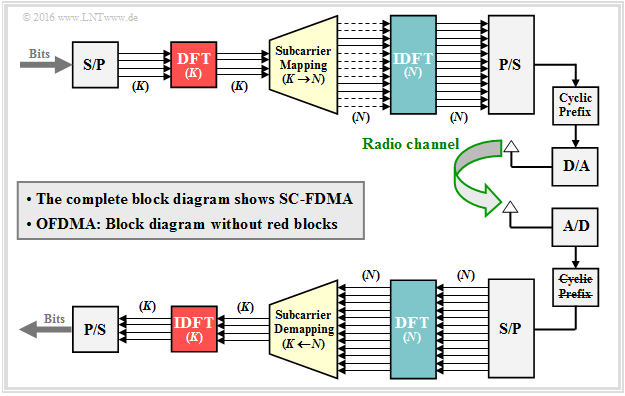 Sender and Receiver Structure of a SC-FDMA System

From the graphic you can see that the two systems are very similar.  In other words:   SC–FDMA is based on OFDMA (or vice versa).

The signal generation for SC–FDMA works similar to OFDMA, but with small changes that are important for mobile radio:

Let us summarize these statements briefly:

$\text{SC–FDMA is different from OFDMA}$  in the following points
[see also the Internet articles  "Single-carrier FDMA"  (in Wikipedia) and  "Difference between SC-FDMA and OFDMA.html"  (from RF Wireless World)]: 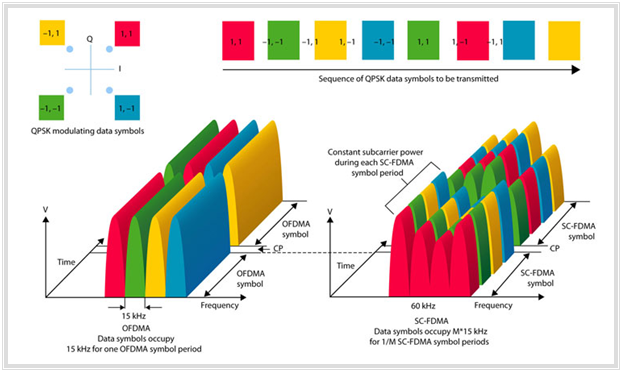 
One can also describe the difference between  "OFDMA"  and  "SC–FDMA"  in such a way:

This difference and the quasi–sequential transmission with SC–FDMA can be seen particularly well from the diagram on the right.

This graphic is taken from a PDF document from  "Agilent–3GPP".

Now the SC–FDMA transfer process shall be examined more in detail.  The information for this section comes largely from  [MG08][2].

The purpose and function of the  "Cyclic Prefix"  is not discussed here in detail.  The reasons for this unit are the same as for OFDM and can be read in the section  Cyclic Prefix  of the book "Modulation Methods".

The following description refers to the  SC–FDMA transmitter  shown here.  Note that with LTE the modulation is adapted to the channel quality:

Different approaches for the Subcarrier Mapping

The following figure illustrates three types of  "Subcarrier Mapping".  To simplify the representation, we will limit ourselves here to the (very small) parameter values  $K = 4$  and  $N = 12$.

$\rm DFDMA$  or  "Distributed Mapping":
Here the modulation symbols are distributed over a certain range of the available channel bandwidth.


$\rm IFDMA$  or  "Interleaved FDMA":
Special form of DFDMA, when the modulation symbols are distributed over the entire bandwidth with equal distances between them.


$\rm LFDMA$  or  "Localized Mapping":
The  $K$  modulation symbols are assigned directly to adjacent subcarriers.  This corresponds to the current 3GPP–specification.

Instead, these three operations can be realized together as one single linear operation.  The complete and mathematically complex derivation can be found for example in  [MG08][2].  Each element  $y_\nu$  of the output sequence is then representable by a weighted sum of the input sequence elements  $x_\nu$  where the weights are complex-valued.


Hence, instead of the comparatively complicated Fourier transform, the operation is reduced

In  Exercise 4.3  the (transmit-side)  "Subcarrier Mapping"  is considered with more realistic values for  $K$  and  $N$  and its differences to the  "Subcarrier Demapping"  (at the receiver) are pointed out.

Advantages of SC-FDMA over OFDM

The decisive advantage of SC–FDMA over OFDMA is its lower  "Peak–to–Average Power Ratio"  $\rm (PAPR)$  due to its single-carrier structure.  This is the ratio of current peak power  $P_{\rm max}$  to average power  $P_{\rm S}$.  $\rm PAPR$  can also be expressed by the  Crest factor  (quotient of the signal amplitudes).  However, the two quantities are not identical. 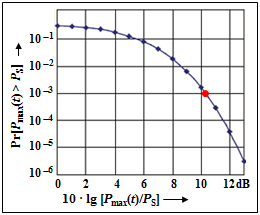 The graphic from the Internet document  [Wu09][3]  shows in double–logarithmic representation the probability that with 64QAM–OFDM the current power  $P_{\rm max}$  is above the average power  $P_{\rm S}$.  You can see:

The power amplifiers should be operated in the linear range, otherwise the signal is distorted.  Non-linearities arise in particular due to

Therefore, OFDM requires the amplifier to operate at a lower power level than its peak power most of the time, which can drastically reduce its efficiency.

The lower PAPR is the main reason why SC–FDMA is used in the LTE uplink and not OFDMA.

After a highly simplified calculation with the same proportionality factor we obtain:

$\text{Example 2:}$  $\rm PAPR$  is directly related to the  "Transmit Amplifier Efficiency".  Maximum efficiency is achieved when the amplifier can operate in the vicinity of the saturation limit. The graphic shows an example of an amplifier's characteristic curve, i.e. the output power plotted against the input power. 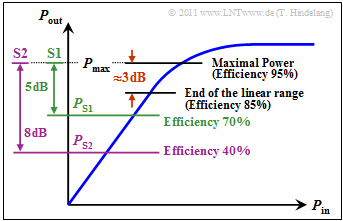 
Nevertheless, for large  $\rm PAPR$  the amplifier must be operated below the saturation limit to avoid too much signal distortion.  Here are some numerical examples:

Exercices to the Chapter