The  "Physical Layer"  is the lowest layer in the OSI layer model of the  "International Organization for Standardization"  $\rm (ISO)$, which is also called  "Bit Transmission Layer".  It describes the physical transmission of bit sequences in LTE and the operation of the various channels according to the 3GPP specification.  All specifications are valid for Frequency Division Duplex  $\rm (FDD)$  as well as for Time Division Duplex  $\rm (TDD)$. 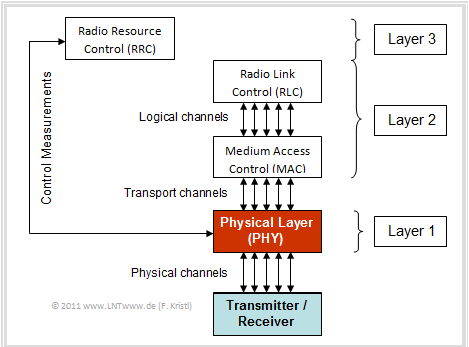 The diagram shows the layers of the LTE protocol architecture.  The communication between the individual layers takes place via three different types of channels:

This chapter deals with the communication between transmitter and receiver in the lowest  (red highlighted)  "Physical Layer".  Basically it should be noted:

According to this graphic the physical layer communicates with

Communication between the individual layers in the LTE downlink

The complexity of the LTE transmission is to be indicated by the left diagram, which has been directly adopted by the  "European Telecommunications Standards Institute"  $\rm (ETSI)$.  It shows the communication between the individual layers (channels) and applies exclusively to the downlink.

LTE uses the multiple access method  $\rm SC–FDMA$  in the uplink transmission from the terminal device to the base station.  Accordingly, the following physical channels exist in the 3GPP specification:

The user data are transmitted in the physical channel  $\rm (PUSCH)$.  The transmission speed depends on how much bandwidth is available to the user at that moment.  The transmission is based on dynamically allocated resources in time and frequency range with a resolution of one millisecond or 180 kHz.  This allocation is performed by the Scheduler  in the base station  ("eNodeB").  A terminal device cannot transmit any data without instructions from the base station.


The exception is the use of the physical channel  $\rm PRACH$, the only channel in the LTE uplink with non–synchronized transmission.  The function of this channel is the request for permission to send data via one of the other two physical channels.  By sending a  "Cyclic Prefix"  and a signature on the PRACH, the terminal and base station are synchronized and are thus ready for further transmissions.


The third uplink channel  $\rm PUCCH$  is used exclusively for the transmission of control signals. By this one understands

If, in addition to the control data, user data are sent from the terminal to the base station at the same time, such control signals can also be transmitted via the PUSCH.  If no user data is to be transmitted, PUCCH is used instead.


A simultaneous use of PUSCH and PUCCH is not possible due to restrictions of the transmission method  "SC–FDMA".  If only one  "Shared Channel"  had been selected for all control information, one would have had to choose between

$\text{Example 1:}$  The reference symbols or channel quality information are distributed in the PUSCH according to the following graphic.

Distribution of reference symbols and user data in PUSCH

The graphic describes the arrangement of the useful information and the signaling data in a "virtual subcarrier".

In contrast to the uplink, LTE uses the multiple access method  $\rm OFDMA$  in the downlink, i.e. during transmission from the base station to the terminal.  Accordingly, the 3GPP consortium specified the following physical channels for this purpose:

The user data are transmitted via the  $\rm PDSCH$.  The resource allocation is done both in the time domain  (with a resolution of one millisecond)  and in the frequency domain  (resolution:  180 kHz).  Due to the use of OFDMA as transmission method, the individual speed of each user depends on the number of assigned resource blocks (à 180 kHz).  A "eNodeB" allocates the resources related to the channel quality of each individual user.


The  $\rm PDCCH$  contains all information regarding the allocation of resource blocks or bandwidth for both the uplink and the downlink.  A terminal device thereby receives information about how many resources are available. 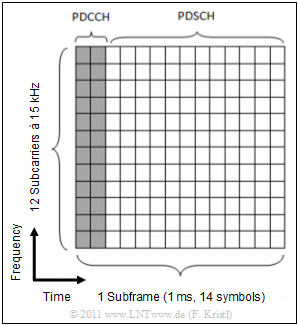 Division between PDCCH and PDSCH
in the LTE downlink

The diagram on the right shows an example of the division between the channels PDCCH and PDSCH:

Via channel  $\rm PCFICH$  the terminal device is informed how many symbols are to be assigned to the control information of the PDCCH.  The purpose of this dynamic division between control and user data is as follows: 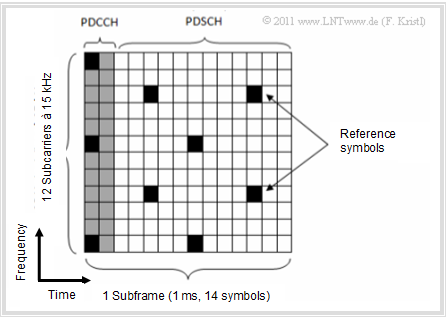 Distribution of reference symbols in the LTE downlink


In addition to the  $\rm PDCCH$,  reference symbols are also required in the downlink to estimate the channel quality and calculate the  "Channel Quality Indicator"  (CQI). . These reference symbols are distributed over the subcarriers (different frequencies) or symbols (different times) as shown in the left graphic. Regarding the other physical channels of the LTE downlink is to be noted:

Processes on the physical layer

By  "Processes in the physical layer"  one understands different methods and procedures, which are used in the bit transmission layer. Among them fall among other things:

A complete list with the corresponding description can be found in  [HT09][1].  Only the last two procedures will be discussed in more detail here.

By  "Power Control"  one understands generally the control of the transmission power with the goal,

With regard to the last point, the standardization of LTE had to take this into account:

With LTE,  power control  is only applied in the uplink, whereas it is more of an "slow" power control.  This means that the procedure specified in LTE does not have to react as quickly as for example in UMTS ("W–CDMA" ).  The reason is that by using the orthogonal carrier system "SC–FMDA" the so-called  Near–Far problem does not exist.

All in all,  LTE power control is intended to find the optimum balance between the lowest possible power and at the same time interference that is still acceptable for the transmission quality (QoS).  This is specifically achieved by estimating the loss during transmission and by calculating a correction factor according to the current site characteristics.  The statements made here are largely taken from  [DFJ08][3].

Every communication system needs a scheme for retransmission of lost data due to transmission errors to ensure sufficient transmission quality.  In LTE  "Hybrid Adaptive Repeat and Request"  $\rm (HARQ)$  was specified for this purpose.  This procedure is also used in  UMTS  in a similar form.


The procedure based on the  "stop–and–wait"  technique is as follows:

In order to ensure continuous data transfer despite the  "stop–and–wait"  procedure,  LTE requires several simultaneous HARQ processes.  In LTE, eight parallel processes are used both in the uplink and in the downlink.

$\text{Example 2:}$  The graphic illustrates how it works with eight simultaneous HARQ processes:

The other processes, which were ignored in this example, proceed in the same way.

LTE uses the modulation method  Quadrature Amplitude Modulation  $\rm (QAM)$.  Different variants are available in the uplink as well as in the downlink, namely

Note:   QAM is not an LTE specific development, but is also used in many already established wired transmission methods, such as those of  $\rm DSL$  ("Digital Subscriber Line"). 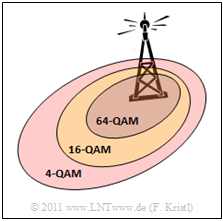 Modulation method depends on distance from base station


The signal space constellations of these variants are shown in the left graphic.  Depending on the environment and distance to the base station, the  "Scheduler"  selects the appropriate QAM method: 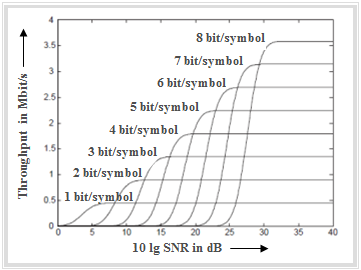 Throughput depending on SNR

The graphic on the right from  [MG08][4] gives the following facts:

It should be noted that the low-rate QPSK (4–QAM) is always used in the control channels, since,

An exception is the channel  $\rm PUSCH$  in the uplink, which transmits both user and control data.  For this reason, the same modulation type is used here for both signals.

Functionality of the scheduler in the LTE uplink

A possible QoS criterion is for example the  "packet delay duration".  So the scheduler tries to optimize the overall situation by using algorithms.


Scheduling is necessary to ensure a fair distribution of resources.  A concrete example is that a user who currently has a poor channel and therefore low efficiency must still be allocated sufficient resources, otherwise the desired (and guaranteed) transmission quality cannot be maintained.


The scheduler controls the selection of the modulation method and the subcarrier–mapping.  The functionality of the scheduler is illustrated by the graphic for the uplink.  Similar statements apply to the downlink.

Due to many advantages, scheduling is an integral part of the LTE Release 8, specified by 3GPP.