LTE-Advanced - a Further Development of LTE

How fast is LTE really?

Consumers are accustomed to being able to use (at least to a large extent) the speed offered by established cable-based services such as  $\rm DSL$  ("Digital Subscriber Line").

It is much more difficult for the providers of mobile radio systems to provide concrete data rate information, since many influences that are difficult to predict have to be taken into account for a radio connection.


As already described in chapter  Technical Innovations of LTE  according to the planning for 2011, data rates of up to 326 Mbit/s are possible in LTE downlink and approx. 86 Mbit/s in uplink.  These figures are only maximum achievable values.  In reality, however, the speed is determined by a variety of factors.  In the following we refer to the downlink, see  [Gut10][1]:

The reality in summer 2011 was as follows:  LTE is already available in some countries  (at least for testing purposes).  In addition to LTE pioneer Sweden, these include the USA and Germany.  In various tests, download speeds of between 5 and 12 Mbit/s were achieved, and in very good conditions up to 40 Mbit/s.  Details can be found in the Internet article  [Gol11][2].


Moreover, the 2011 LTE network did not seem ready to replace the established wired Internet connections due to excessive delay times and the resulting occasional connection interruptions.  However, the development in this area progressed with giant strides, so that this information from summer 2011 was not relevant for very long.

Some system improvements through LTE-Advanced

While the first LTE systems corresponding to Release 8 of December 2008 slowly came onto the market in summer 2011, the successor was already on the doorstep.  The Release 10 of the  "3GPP"  completed in June 2011 is  "Long Term Evolution–Advanced", or in short  $\rm LTE-A$.  It is the first technology to meet the requirements of the ITU ("International Telecommunication Union") for a 4G standard.  A summary of these requirements, also called "IMT–Advanced", can be found in great detail in an ITU article  (PDF).


Without claiming to be exhaustive, some of the features of LTE–Advanced are mentioned here: 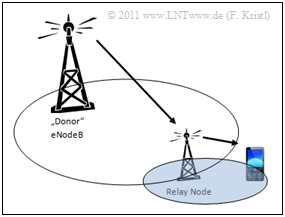 In this way, high data rates and good transmission quality without interruptions are guaranteed without great effort.  By increasing the physical proximity to the base stations, the reception quality in buildings is also improved.

Another feature added to LTE–A is known as  "Coordinated Multiple Point Transmission and Reception"  $\rm (CoMP)$.  This is an attempt to reduce the disturbing influence of intercell interference.  With intelligent scheduling across several base stations, it is even possible to make intercell interference usable.  The information for a terminal device is available at two adjacent base stations and can be transmitted simultaneously.  Details on CoMP–technology can be found, for example, in the internet article  [Wan13][3]  from 3gpp.

Standards in competition with LTE or LTE-Advanced

In addition to the LTE specified by the 3GPP consortium, there are other standards that are intended to serve the purpose of fast mobile data transmission.  The two most important ones are briefly discussed here:


This is a third-generation mobile communications standard that was specified and further developed by  3GPP2  ("Third Generation Partnership Project 2").  Further information on cdma2000 can be found in the section  IMT–2000 standard.


Far less is known about the further development of this standard than about LTE.  It is worth mentioning that for cdma2000 and UMB there is a sub–standard specified exclusively for data transmission.  The Cologne telecommunications provider  "NetCologne" has been offering mobile Internet in the 450 MHz range on this basis since 2011.  Furthermore, cdma2000 is insignificant in Germany.


Note:   The "3GPP2" was founded almost at the same time as the almost identically named  3GPP  in December 1998, obviously due to ideological differences.


This term refers to a wireless transmission technology based on the IEEE standard 802.16.  It belongs to the family of the 802 standards like WLAN (802.11) and Ethernet (802.3).  There are two different sub–specifications to WiMAX, namely

The potential of the static WiMAX connections lies mainly in the long range with nevertheless comparatively high data rate.  For this reason, static WiMAX was initially traded as DSL alternative for thinly populated areas.  For example, with a Line of Sight (LoS) connection between transmitter and receiver over 15 kilometers, about 4.5 Mbit/s are possible.  In urban areas without line of sight, WiMAX still has a range of about 600 meters, a much better value than the 100 meters typically offered by WLAN.


At the moment  (2011)  it also worked on a further development called  "WiMAX2".  According to the initiators,  WiMAX2 in the mobile version is a 4G standard which, just like LTE–Advanced, can achieve data rates of up to 1 Gbit/s.  WiMAX2 was implemented in practice by the end of 2011.

In Germany, WiMAX does not play a major role (in 2011), since both the German government in its broadband offensive and all major mobile phone operators have declared  "Long Term Evolution"  (LTE or LTE–A)  to be the future of mobile data transmission.

Milestones in the development of LTE and LTE-Advanced

Finally, a brief overview of some milestones in the development towards LTE from the perspective of 2011: