The main motivation for the development of  Third generation mobile radio systems   was the realization that 2G systems could not satisfy the bandwidth requirements for the use of multimedia services. 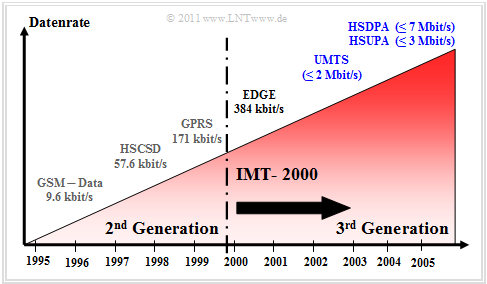 Development of the mobile radio systems

The graph shows the development of mobile radio systems from 1995 to 2006 in terms of performance.  The specified data rates were still realistic for 2011 with no more than two active users in one cell.  The maximum values often stated by providers were mostly not reached in practice.

Third-generation mobile communications systems should have a greater bandwidth and sufficient reserve capacity to ensure a high quality of service  $\rm (QoS)$  even with growing requirements.

Prior to the development of the 3G systems, the "International Telecommunication Union"  (ITU) created a catalog of requirements which includes the following general conditions:

Around 1990, the  "International Telecommuncation Union"  (ITU) created the standard $\text{IMT-2000}$  $\rm (I\hspace{-0.02cm}$nternational $\hspace{0.05cm}\rm M\hspace{-0.03cm}$obile $\hspace{0.05cm}\rm T\hspace{-0.03cm}$elecommunications at the year $2000)$, which was to make the above-mentioned requirements possible.  IMT–2000 comprises a number of third-generation mobile communications systems that have been brought closer together in the course of standardization to enable the development of common terminals for all these standards.


In order to take into account different preliminary work and to give network operators the possibility to continue to use existing network architectures in part, IMT–2000 contains several individual standards.  These can be roughly divided into four categories:

We here concentrate on the mobile communications system UMTS developed in Europe, which supports the two standards  "W–CDMA"  and  "TD–CDMA"  of the system family IMT–2000, under the following designations:

The network architecture of UMTS can be divided into two main blocks.


⇒   The  "UMTS Terrestrial Radio Access Network"   $\text{(UTRAN)}$  ensures the wireless transmission of data between the transport level and the radio network level.  This includes the base stations and the control nodes, whose functions are described below:

⇒   The  "Core Network"  $\rm (CN)$  takes over the switching of the data within the UMTS network.  For this purpose, it contains the following hardware and software components at  "Circuit Switching" :

The graphic shows the UMTS architecture for circuit switching, where the Core Network  $\rm (CN)$  is organized similarly to the GSM architecture.

The  system architecture for packet switching  differs fundamentally in the following points: 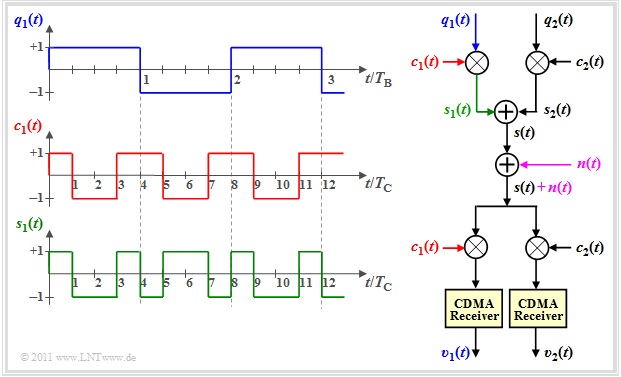 Principle and signal characteristics with "DS-CDMA" for two users

The graphic shows the principle using a simplified model and exemplary signals for the "user 1".  For simplification the noise signal  $n(t) \equiv 0$  is set for the displayed signals.  It is valid:

Requirements for the spreading codes

The spreading codes for UMTS should 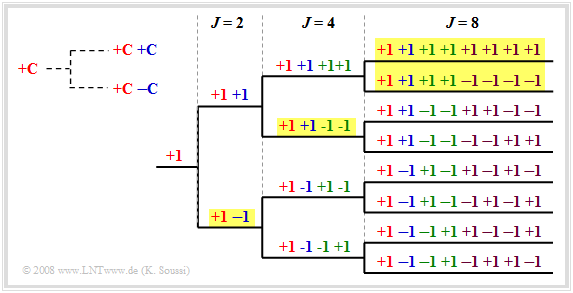 The situation described here is also clarified by the SWF applet  OVSF codes .

In order to get more spreading codes and to be able to serve more participants, after the band spreading using  $c(t)$  the sequence is again scrambled chip by chip using  $w(t)$  without further spreading.

The use of quasi–orthogonal codes makes sense, because the amount of orthogonal codes is limited and different participants can use the same spreading codes due to the scrambling. 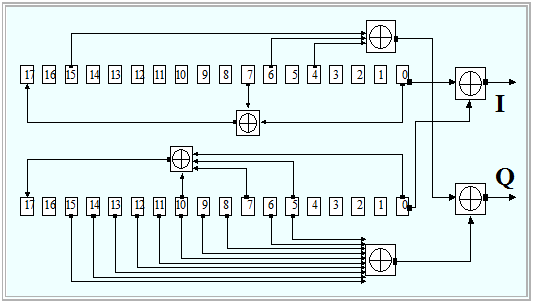 $\text{Example 2:}$  In UMTS, so-called Gold codes are used for scrambling: 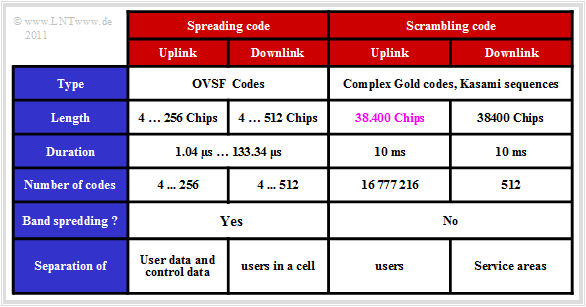 Some examples and properties of suitable spreading and scrambling codes

Modulation and pulse shaping for UMTS

In UMTS the following modulation methods are used in FDD–mode:

Modulation and pulse shaping for UMTS

The graphic shows the  $I/Q$ multiplexing method  (another name for the "dual channel BPSK")  in the equivalent low-pass range.

Further information on this topic can be found in the section  Frequency responses and pulse shaping for UMTS  of the book "Examples of communication systems".  There you will also find a graphic with the Nyquist frequency response  $H(f)$.  It is a  Raised Cosine with the following dimensioning:

In order to meet the ever-increasing demand for higher data rates in mobile communications, the UMTS standard has been continuously developed.  The most important changes within the third generation resulted from the introduction of

Together, HSDPA and HSDUPA result in the  $\rm HSPA$ standard.


The main motivation for these further developments was to increase data rate/throughput and minimize response times in packet-switched transmission.

These increases were achieved by

In addition to the use of HARQ and "Node B scheduling", the significant improvement through HSUPA is due to the introduction of the additional upstream channel  $\rm E\hspace{0.05cm}–\hspace{-0.05cm}DCH$  (Enhanced Dedicated Channel).