One possibility for realizing a CDMA system is the so-called  »Direct-Sequence Spread Spectrum«  $\text{(DS–SS)}$ ,  which is explained here using the block diagram.  The corresponding model in the equivalent low-pass range is shown below.

$\text{This system can be characterized as follows:}$

In the following we consider  Pseudo-Noise Band Spreading  in the equivalent low-pass region.  So the model outlined below applies.

Signal curves with a single participant

A disadvantage of direct-sequence spread spectrum modulation is that under unfavorable conditions interference can occur between the subscriber under consideration and other subscribers.

To the individual signal curves is to be noted: 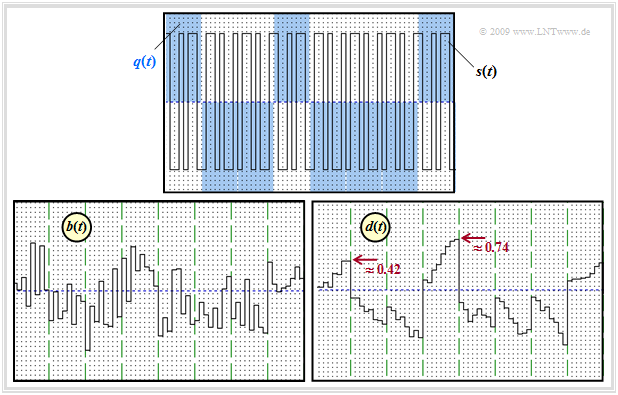 $\text{Example 2:}$  The two lower graphs change significantly from the first example when AWGN noise is considered.

After thresholding the samples  $d(νT)$,  one nevertheless obtains mostly the sought amplitude coefficients.  The vague statement "mostly" is quantifiable by the bit error probability  $p_{\rm B}$.   As

and due to the fact that the statistical properties of white noise  $n(t)$  are not changed by the multiplication with the  $±1$ signal  $c(t)$,  the same result is obtained again as for the  conventional BPSK  without band spreading/band compression, independent of the spreading degree  $J$ :

We continue to assume only one participant.  In contrast to the calculation in the last section,  however,  there are now

In a conventional transmission system without band spreading/band compression,  such a narrowband interferer would increase the error probability to an unacceptable extent.  In a system with band spreading   ⇒   "direct-sequence spread spectrum modulation",  the interfering influence is significantly lower,  since

The larger the spreading factor  $J$,  the smaller the increase in noise power due to the sinusoidal interferer.

Note:   This fact has led to the spreading factor  $J$  being often referred to  "spreading gain"  in the literature,  compare for example  [ZP85][1].

But the above error probability equation can also be applied approximately when an unspread transmission of higher data rate and a spread spectrum system of lower rate operate in the same frequency band:   The interfering influence of the former system with bandwidth  $B_{\rm I}$  on the  spread spectrum system  can be treated approximately as a  "narrowband interferer"  as long as  $B_{\rm I}$  is sufficiently small.