The diagram shows an analog transmission system at the top and a digital system drawn below.  The main differences are highlighted in red: 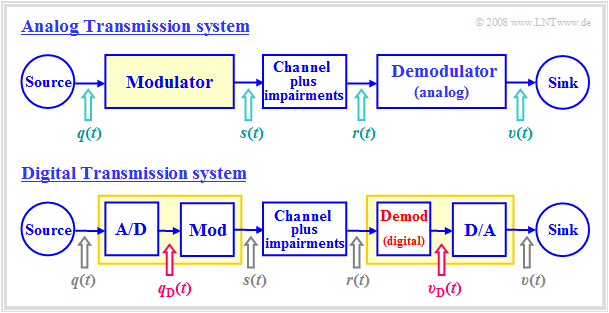 While in the upper system the analog source signal  $q(t)$  is applied to the modulator input,  in the lower digital system the modulating signal  $q_{\rm D}(t)$  is a digital signal,  characterized by the amplitude coefficients  $a_ν$,  the basic pulse  $g_q(t)$  and the symbol duration  $T$:

For example,  this method is used in optical transmission systems (since there are no negative light pulses) and is also known as  "On–Off–Keying".

In the right half of the figure,  the corresponding power-spectral densities are shown - although not to scale.

It should be noted about these equations:

The diagram shows the block diagram of an ASK system including the receiver components.

The demodulation is performed coherently by means of a  synchronous demodulator,  the operation of which has already been described for the analog modulation methods AM and PM.

To summarize the block diagram: 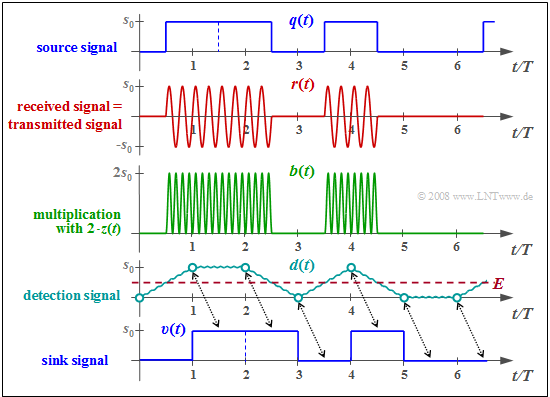 The individual signal characteristics can be interpreted as follows:

We further assume ASK modulation as well as an ideal transmission channel, i.e.

Further, it is assumed for this section

The diagram shows such an  incoherent demodulator   ⇒   the  result of the demodulator is independent of the carrier phase  $ϕ_{\rm T}$,  which the receiver does not know.

The operation of this demodulator will be given here only as an outline:

we obtain in the  $ν$–th time interval:

This equation for  Binary Phase Shift Keying  $($ $\rm BPSK)$  can be transformed as follows:

In the diagram the signals and the corresponding power-spectral densities are sketched.  It can be seen:

Demodulation and detection of BPSK signals

Due to the constant envelope of the BPSK signal,  the demodulation must always be coherent here.  The  same block diagram  can be assumed as for coherent ASK demodulation. 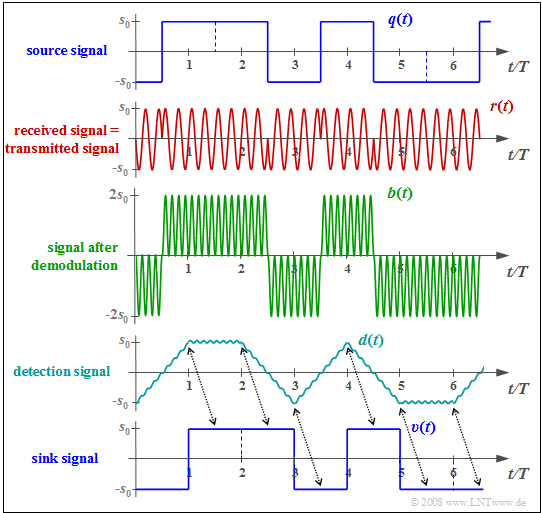 $\text{Example 2:}$  The diagram shows from top to bottom

A comparison with the corresponding  signals  in the coherent demodulation of the ASK shows:

The diagram on the right shows the block diagram of the modulator for  "Differential Phase Shift Keying"  $\rm (DPSK)$.

before it is fed to the BPSK modulator. 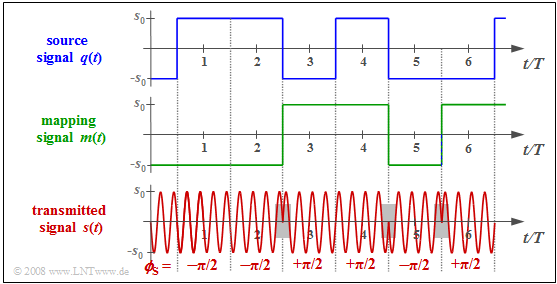 Signals at the DPSK transmitter

$\text{Example 3:}$  The diagram on the right shows

In the following,  $v_ν$  denotes the coefficients after the decision,  which should coincide with the transmission-side amplitude coefficients  $q_ν$.

The following principle can be seen:

Below the phase values  $ϕ_{\rm S}$  are given for the first six symbols:

The graphic shows the block diagram of a transmission system with DPSK modulation  ("Differential Phase Shift Keying")  and differential coherent demodulation.  In bullet point form,  the given system can be described as follows:

We now assume that the channel causes a phase rotation by  $ϕ$,  which the receiver does not know  (red block):

The error probabilities of the discussed digital modulation methods  (ASK,  BPSK,  DPSK)  are calculated in chapter  Linear Digital Modulation - Coherent Demodulation  of the book  "Digital Signal Transmission"  under different boundary conditions.  Here only some results are given without proof,  valid for

The equations given here are to be evaluated in  Exercise 4.8.

Exercise 4.7: Spectra of ASK and BPSK