In all subsequent chapters, the following model will be assumed:

The task of any message transmission system is

$\text{Definition:}$  An  ideal system  is achieved when the following conditions hold:

This takes into account that  $n(t) \equiv 0$  is physically impossible due to  Thermal Noise.

$\text{Definition:}$  A  distortionless system  is achieved,  if from the above list only the last restriction is effective:

This error signal is composed of two components:

$\text{Definition:}$  As a measure of the quality of the communication system,  the  signal-to-noise (power) ratio  $\rm (SNR)$  $ρ_v$  at the sink is defined as the quotient of the signal power (variance) of the useful component  $v(t) - ε(t)$  and the disturbance component  $ε(t)$,  respectively:

For the power of the useful part,  we obtain regardless of the delay time  $τ$: 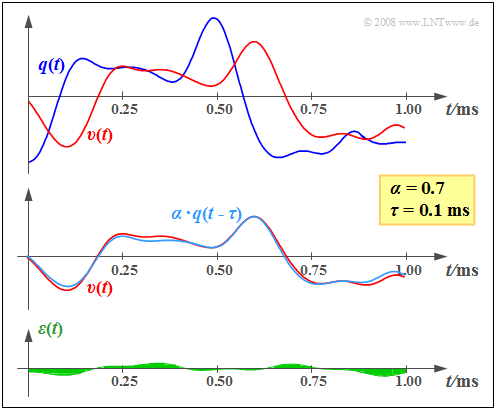 The bottom sketch shows the remaining error signal  $ε(t) = v(t) - α · q(t - τ)$  after correcting for attenuation and delay.  We refer to the mean square ⇒ "variance" of this signal as the noise power  $P_ε$.

Investigations with regard to signal distortions

All modulation methods described in the following chapters lead to distortions under non-ideal conditions, i.e. to a sink signal

Simplified model of a communication system

which differs from  $q(t)$  by more than just damping and delay.  For the study of these signal distortions, we always assume the following model and premises:

Depending on the type and realization of modulator and demodulator, the following signal distortions occur:

$\text{Linear distortions}$, as described in the  "chapter of the same name"  in the book "Linear and Time-Invariant Systems":

$\text{Nonlinear distortions}$, as described in the  "chapter of the same name"  in the book  "Linear and Time-Invariant Systems":

We refer you to three of our  (German language)  basic learning videos:

Some remarks on the AWGN channel model

To investigate the noise behavior of each individual modulation and demodulation method, the starting point is usually the so-called  $\rm AWGN$  channel, where the abbreviation stands for  "$\rm A$dditive $\rm W$hite $\rm G$aussian $\rm N$oise".  The name already sufficiently describes the properties of this channel model.

We would also like to refer you to the  (German language)  three-part learning video  "Der AWGN-Kanal"   ⇒   "The AWGN channel".

Investigations at the AWGN channel

In all investigations regarding noise behavior, we start from the block diagram sketched below. We will always calculate the sink SNR  $ρ_v$  as a function of all system parameters and arrive at the following results:

$\text{Conclusion:}$  Considering these four assumptions, we conclude that it makes sense to express the sink SNR in normalized form as

In the following,  we refer to   $ξ$  as the  performance parameter.

The input variables summarized in  $ξ$  are marked with blue arrows in the above block diagram, while the quality criterion  $ρ_v$  is highlighted by the red arrow.

$\text{Example 2:}$  The left graph shows the sink SNR  $ρ_v$  of three different systems,  each as a function of the normalized performance parameter

Increasing the performance parameter  $ξ$  does not significantly improve  $\text{System C}$,  unlike in $\text{System A}$.  Such behavior can be observed,  for example,  in digital systems where the sink SNR is limited by the quantization noise.  Along the horizontal section of the curve,  a higher transmit power will not result in a better sink SNR – and thus a smaller bit error probability.

Usually,  the quantities  $ρ_v$  and  $ξ$  are represented in logarithmic form,  as shown in the graph on the right:

Exercise 1.2:   Distortion? Or no distortion?