Objectives of Modulation and Demodulation

This book deals with modulation and demodulation,  two classical and important methods for Communications Engineering,  which already have a very long tradition but are nevertheless constantly developing.

Before  analog amplitude and angle modulation  are described in detail in the following chapters,  along with today's more relevant digital modulation methods,  this first chapter introduces the definitions and descriptive variables which are equally valid for all systems.

This chapter deals in detail with:

The communication system under consideration

The communication system considered in the book "Modulation Methods"

Throughout the book  "Modulation Methods",  we will be base our communication system on the block diagram shown here.

The  transmission medium   ⇒   physical transmission channel  is characterized here by its  frequency response  $H_{\rm K}(f)$.  We will consider:

Adapting to the channel frequency response and noise power density

Further reasons for modulation and demodulation are given in the following sections.

Another advantage of modulation with a harmonic oscillation as a carrier signal is that a single transmission channel of sufficient bandwidth can be used by several signals simultaneously. One then speaks of

The principle of multiplexing

The diagram illustrates the situation.  $K$  signals are to be transmitted simultaneously via a physical channel of appropriate bandwidth.  The subchannels   (German:  "Teilkanäle"   ⇒ "T")  are marked here with  $T_1$, ... , $T_K$ .  One proceeds as follows:

$\text{Example 2:}$  Frequency division multiplexing has been used for many decades in analog TV and radio transmission.

For the entire book  "Modulation Methods",  it is assumed that the source signal  $q(t)$  and the sink signal  $v(t)$  are both analog signals.

The two block diagrams illustrate the main differences between an analog and a digital transmission system.  It becomes clear that:

$\text{Example 4:}$  The two graphs show the respective input signals  (each in blue dashed lines)  and output signals  (solid red)  of the modulator for an analog and a digital transmission system. 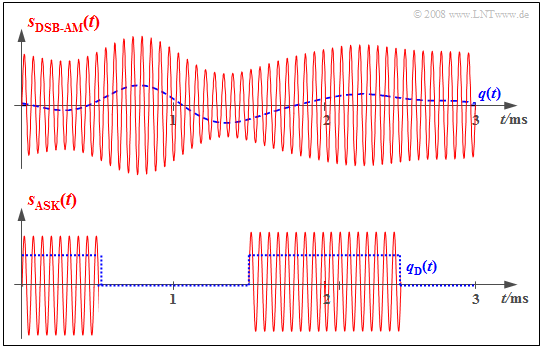 Analog modulation methods currently (2005)  still have a certain significance,  especially for the distribution of radio and television programs,  but they are being increasingly displaced by corresponding digital methods in this area.  Nevertheless,  we will devote more space to analog methods in this book :

$\text{The reasons for this are:}$

The following inventions,  among others,  were necessary for these developments:

The advantages of digital modulation methods are numerous:

All systems developed in recent years are digital, for example:

The numbers in parentheses indicate the year of first use in each case. In most cases, it took more than a decade from invention, and then standardization, to the development of an operational system. 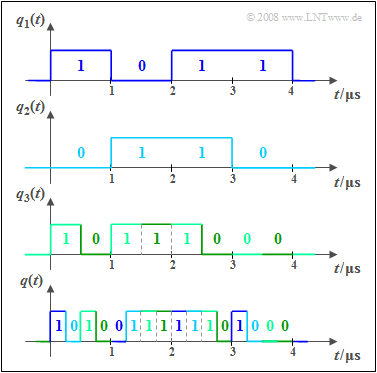 The diagram is intended to illustrate the principle using an example:

Exercise 1.1: Multiplexing in the GSM System