This first chapter serves as an  »introduction to the whole topic«,  which is covered by the nine books of the  $\rm LNTwww$  series.

This chapter describes in detail:

At the end of the chapter follows a short summary about   »Calculating with complex numbers«.

One distinguishes basically between the terms  "message"  and  "information", which are often used synonymously nowadays.

$\text{Example 1:}$  An e–mail from Mr. Maier to Mrs. Miller is always a  "message".  For Mrs. Miller, however, receiving this e–mail only means an information gain if she learns something new.  The  "information"  transmitted by a message therefore depends to a great extent on the knowledge level of the recipient. In practice, the information contained in a message is rather small, especially in the field of telephony.

The transmission of messages   ⇒   »communications«  and their storage always requires an energetic or material carrier called  "signal".  Physically the representation of a message is done by signals, which can be of very different nature.

The set of all message signals can be cataloged by different criteria, as described in the chapter  "Signal classification".

Block diagram of a communications system

In the following diagram a communication system is shown schematically.

The individual system components have the following tasks:

As examples for message sources and for the source signal  $q(t)$  can be mentioned: 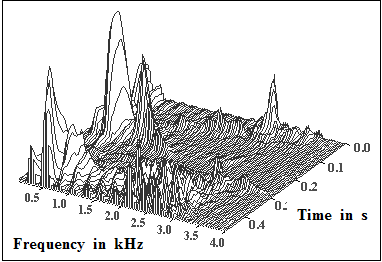 Frequency-time representation of a speech signal

$\text{Example 2:}$  On the right you see the frequency-time representation of a speech signal.

We thank  Markus Kaindl[1], LNT/TUM, for providing the graphic.

Tasks of the transmitter

The essential task of the transmitter is to convert the source signal  $q(t)$  into a transmitted signal  $s(t)$  in such a way that it is adapted as well as possible to the transmission channel while maintaining the specified performance characteristics.  For this purpose each transmitter contains corresponding  »functional units«  such as

Depending on the application, the  »performance characteristics« mentioned above mean that very specific properties are required for signal transmission.

Such features are for example:

The  »transmission medium«  with its physical properties plays an essential role in the feasibility of certain transmission properties.

Examples of transmission media are:

This means:   The received signal  $r(t)$  is different from the transmitted signal  $s(t)$,  possibly due to

In addition, the  »interfering signals«  that occur during signal transmission must always be taken into account.  The following are examples of this:

As examples of the message sinks we can mention

To ensure that at least in the ideal case the sink signal  $v(t)$  could coincide with the source signal  $q(t)$  – in practice however never attainable – all measures taken on the transmission side must be reversed by the receiver.

Corresponding  »functional units«  of a receiver are:

Another important task of the receiver is to eliminate as much as possible the signal distortions and noise that occur during transmission.  The realization of such system components for transmitters and receivers is done by different electrical networks and assemblies.

Here, too, some functional units can be named as examples:

$\text{Definition:}$  One speaks of  $\text{noise}$, if for the sink signal applies:

$\text{Definition:}$  The transmission is  $\text{distortion–free}$  if the sink signal is as follows:

In this context we refer to the (German language) learning video

Both effects are not particularly disturbing for a  unidirectional transmission:
For example, one can still speak of a live transmission if the television picture arrives delayed by (a fraction of) seconds.

With a  bidirectional transmission however, a long runtime can lead to problems:
During a telephone conversation, the two interlocutors then interrupt each other. 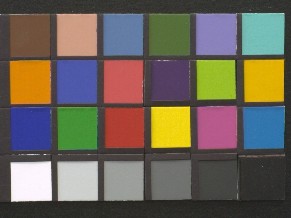 $\text{Example 3:}$  The terms used here shall now be clarified by an image signal.

Effects of  "noise"  and  "distortion"  on an image signal