Description of a nonlinear systems

Also in this nonlinear system,  we denote the signals at the input and the output by  $x(t)$  and  $y(t)$  respectively,  and the corresponding spectral functions by  $X(f)$  and  $Y(f)$.

An observer will note the following here: 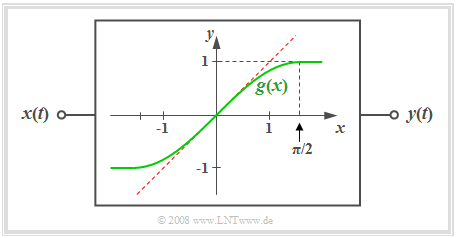 In the above diagram, the operating point is identical to the zero point and  $c_0 = 0$  holds.

$\text{Example 1:}$  The properties of nonlinear systems listed in the  first section of this page  are illustrated here using the characteristic curve  $y = g(x) = \sin(x)$  shown in the centre of the diagram. 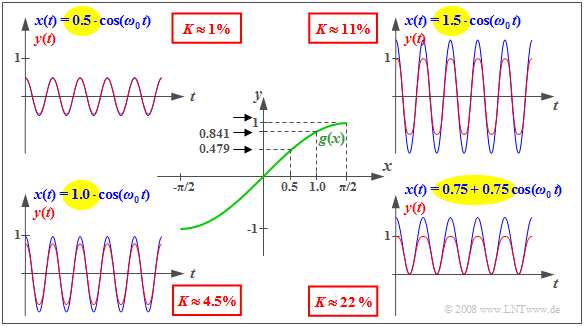 Effects of a nonlinear characteristic curve

The outer diagrams show – each in blue – cosine-shaped input signals  $x(t)$  with different amplitudes  $A$  and the corresponding distorted output signals  $y(t)$ in red.  It can be seen that the nonlinear distortions increase with increasing amplitude,  which are quantified by the distortion factor  $K$  defined in the next section.

Definition of the distortion factor

$\text{Definition:}$  With these amplitude values  $A_i$  the equation for the  distortion factor is:

In the second equation

It is explicitly pointed out that the amplitude  $A_x$  of the input signal is not taken into account when computing the distortion factor.  Also a resulting direct (DC) component  $A_0$  remains unconsidered.

A comparison with the section  Consideration of attenuation and runtime  reveals that for the special case of a cosine-shaped input signal the signal–to–distortion–power ratio defined is equal to the reciprocal of the distortion factor squared: 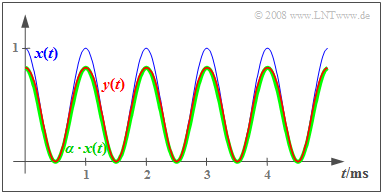 Influence of a nonlinearity on a cosine signal

then the output signal is:

The trigonometric transformations for  $\cos^2(α)$  and  $\cos^3(α)$  were used to calculate the Fourier coefficients.  The distortion factor is thus given by

A major disadvantage of the definition of the distortion factor is the thereby specification to cosine-shaped test signals, i.e. to conditions remote from reality.

By varying the centre frequency  $f_{\rm M}$  and integrating over all these small interfering components the distortion power can thus be determined. More details on this method can be found, for example, in  [Kam04][1].

Constellations which result in nonlinear distortions

As an example of the occurrence of nonlinear distortions in analog message transmission systems some constellations which result in such distortions shall be mentioned here.  In terms of content, this anticipates the book  Modulation Methods.