Classification of the Distortions

$\text{Definition:}$  In general,  $\text{distortion}$  is understood to be undesirable deterministic changes in a message signal caused by a transmission system.

In addition to stochastic interferences  (noise, crosstalk, etc.), such deterministic distortions are a critical limitation on the transmission quality and rate for many communication systems.

This chapter presents these distortions in a summarising way, in particular:

Prerequisites for the second main chapter

Description of a linear system

In the following, we consider a system whose input is the signal  $x(t)$  with the corresponding spectrum  $X(f)$.  The output signal is denoted by  $y(t)$  and its spectrum by  $Y(f).$

The block labelled  "system"  can be a part of an electrical circuit or a complete communicarion system consisting of transmitter, channel and receiver. For the whole main chapter  "Signal Distortions and Equalization"  the following shall apply:

In the following, we will classify communication systems in more detail in this respect.

$\text{Definition:}$  A  distortion-free system  exists if the following condition is fulfilled:

Exemplary signals of a distortion-free system

Quantitative measure for the signal distortions 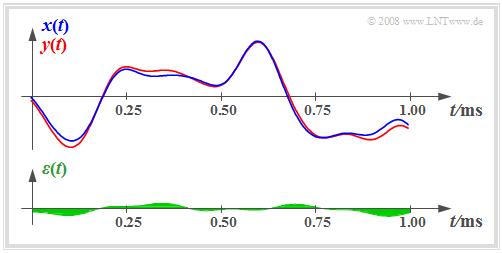 Input and output of a distortive system and error signal (below)

We now consider a distortive system on the basis of the input and output signal.

As a quantitative measure of the strength of distortions, for example, the  squared mean of this difference signal is applicable:

The following should be noted about this equation:

We reference the interactive applet  Linear Distortions of Periodic Signals.

The equations given on the last page do not result in applicable statements if the system is additionanlly affected by an attenuation factor  $α$  and/or a transit time  $τ$.  The diagram shows the attenuated, delayed and distorted signal 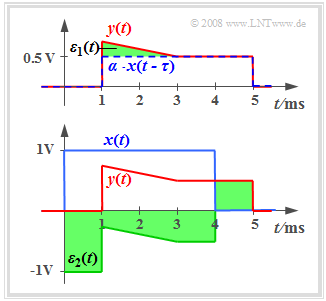 The term  $ε_1(t)$  summarises all distortions.  It can be seen from the green area that the error signal  $ε_1(t)$  is relatively small.

In contrast to this, if the attenuation factor  $α$  and the transit time  $τ$  are unknwon, the following should be noted:

A distinction is made between linear and nonlinear distortions:

If the system is linear and time-invariant  $(\rm LTI)$, then it is fully characterised by its  frequency response  $H(f)$ and the following can be stated:

$\text{Conclusion:}$  The differences between linear and non-linear distortions are illustrated by the following diagram:

A band limitation  $(B_y < B_x)$  is a special form of linear distortion, which will be discussed in the  chapter after next.

The lower diagram shows an example of  non-linear distortions  $(B_y > B_x)$.  For such a system no frequency response  $H(f)$  can be given.

Descriptive quantities applicable for non-linear systems will be explained in the next chapter  Non-linear Distortions . In most real transmission channels both linear and non-linear distortions occur.  However, for a whole range of problems the precise separation of the two types of distortions is essential.  In  [Kam04][1]  a corresponding substitute model is shown.

We refer here to the  (German language)  learning video  Linear and non-Linear distortions.