Causes and Effects of Intersymbol Interference

# OVERVIEW OF THE THIRD MAIN CHAPTER #

The third main chapter focuses on  intersymbol interference  $\rm (ISI)$,  which arises,  for example,  from distortions of the transmission channel or is related to a realization of the receiver filter that deviates from the Nyquist condition.  Subsequently,  some equalization methods are described which can be used to mitigate the system degradation due to intersymbol interference.

The description is given throughout in the baseband.  However,  the results can easily be applied to the carrier frequency systems discussed in the chapter  "Linear Digital Modulation - Coherent Demodulation".

In detail,  this chapter deals with:

Definition of the term "Intersymbol Interference"

For the first two main chapters of this book,  it was assumed that the basic detection pulse  $g_d(t)$

If we denote the samples of  $g_d(t)$  at multiples of the symbol duration  $T$  (spacing of the pulses)  as the  "basic detection pulse values",  it has been tacitly assumed so far: 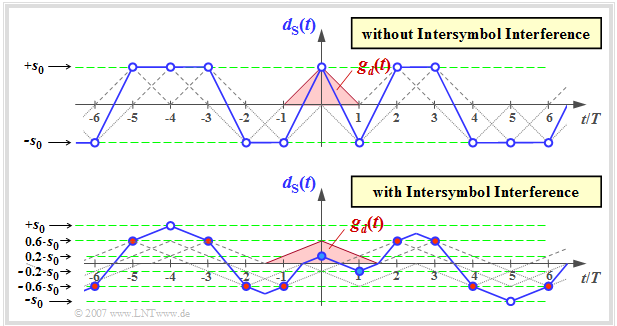 Detection signals with and without intersymbol interferences

of the detection signal at the instants  $\nu \cdot T$  can take only two different values,  namely  $\pm g_0$.

In both plots,  the  (triangular)  basic detection pulse  $g_d(t)$  is drawn in red.  The detection time points  $\nu \cdot T$  are marked by blue circles.

One can see from the lower signal plot:

So far,  the effects of intersymbol interference have been presented as vividly as possible.  An exact definition is still missing.

The graphic shows the   "eye diagram"  for a

Eye diagrams with and without intersymbol interference

The definition,  meaning and calculation of the eye diagram will be discussed in detail in the chapter  "Error Probability with Intersymbol Interference".  These screenshots can be interpreted as follows:

The left diagram indicates intersymbol interference,  since no noise is taken into account here.

Some remarks on the channel frequency response

For the further sections in this third main chapter the following block diagram is  (mostly)  assumed.  The main difference to the  block diagram of the first main chapter  is the channel frequency response  $($German:  "Kanalfrequenzgang"   ⇒   subscript  "K"$)$,  which is always assumed to be ideal   ⇒    $H_{\rm K}(f) = 1$.

Block diagram of a system with distorting channel

In the main chapter 4:   "Properties of electrical lines" of the book  "Linear and Time Invariant Systems"  it is shown that these equations reproduce the conditions with good approximation for wireline communication systems via coaxial cable.  For a two-wire line,  the deviation between this very simple  (analytically manageable)  formula and the actual conditions is somewhat larger.


A short summary of these derivations follows in the next two sections.

Frequency response of a coaxial cable

where the following parameters apply for these dimensions – referred to as  "normal coaxial cable":

In the above equation the attenuation parameters  ("alpha")  are to be inserted in  "Np"  and the phase parameters  ("beta")  in  "rad". 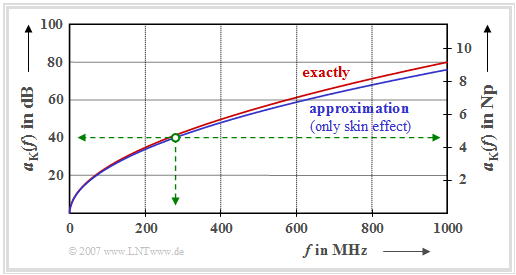 Attenuation curve of a coaxial cable and approximation  (skin effect only)

The graph shows the exact attenuation curve for a standard coaxial cable of one kilometer length and an approximation for frequencies up to  $f = 1000\ \rm MHz$:

We refer to the interactive HTML5/JavaScript applet  "Attenuation of copper cables".


You can see from the diagram and the above numerical values:

Impulse response of a coaxial cable 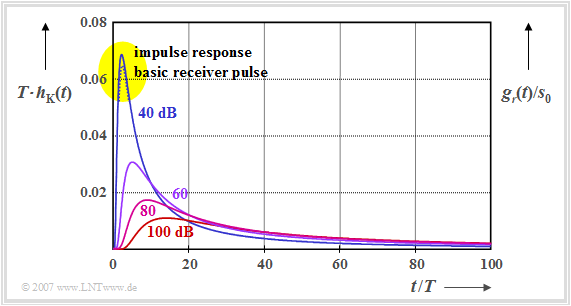 One can see from this time domain plot:

In  Exercise 3.1,  the coaxial cable impulse response is analyzed in detail.  We also refer to the interactive  (German language)  SWF applet  "Time behavior of copper cables".

Consider again the block diagram of a transmission system, assuming a highly distorting channel, such as is present in wireline transmission.


Due to the channel frequency response  $H_{\rm K}(f)$,  which is highlighted in red in the diagram,  there are also certain limitations for the other system components:

Block diagram of a system with  (highly)  distorting channel

$\text{Conclusion:}$  In the following chapters we consider only the binary bipolar redundancy-free transmission   ⇒   bit rate  $R_{\rm B} = 1/T$.  It is always assumed that: