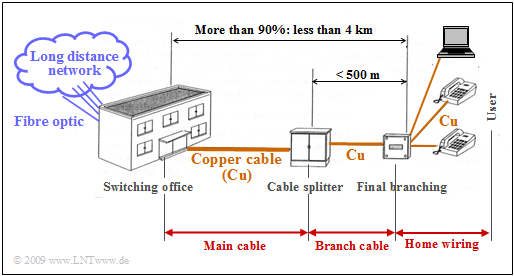 In a telecommunications system,  a distinction is made between

which are separated from each other by the local exchange.

Originally,  the entire telephone network was based on copper lines.  In the mid-1980s,  however,  the  (mainly coaxial)  copper cables were replaced by optical fiber for long-distance traffic,  as the steadily growing demand for bandwidth could only be met with optical transmission technology.

Bundling and twisting of copper wires

To reduce crosstalk on neighboring line pairs due to inductive and capacitive couplings and to increase the packing density,  two pairs of twisted pairs are twisted into a so-called  "star quad" .  The diagram below shows such a star quad and a bundled cable.

The attenuation function  $α(f)$  (per unit length) and the wave impedance  $Z_{\rm W}(f)$  of twisted pairs in real laid cables deviate to a greater or lesser extent from the theory presented in the chapter   Some Results from Line Transmission Theory . Reasons for this are: 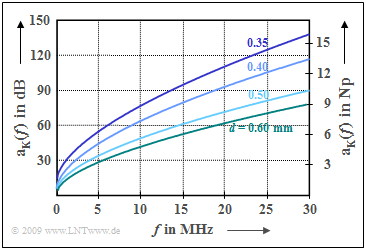 Various network operators have measured  $α(f)$  and  $Z_{\rm W}(f)$  and derived empirical equations from them.   We refer here to the work of M. Pollakowski and H.W. Wellhausen of the Fernmeldetechnisches Zentralamt der Deutschen Bundespost in Darmstadt documented in  [PW95][1].

The graph shows the measurement results:

One can see from this representation:

Conversion between  $k$  and  $\alpha$  parameters

To calculate the frequency response  $H_{\rm K}(f)$,  one should always start from the measured attenuation function (per unit length)

If,  on the other hand,  one wishes to determine the associated time function in terms of the impulse response  $h_{\rm K}(t)$,  it is more convenient,  as shown in the  section after the next,  if the attenuation function per unit length can be represented in the form that is also common for coaxial cables:

As a criterion of this conversion we use that the squared deviation between both functions is minimal in the range from  $f = 0$  to  $f = B$ :

In this case, the attenuation function per unit length  $α(f)$  increases with the square root of the frequency. This results in the same curve as for a coaxial cable, where the well-known skin effect dominates.

In the following, three examples will illustrate how the underlying bandwidth  $B$  influences the results of this conversion. 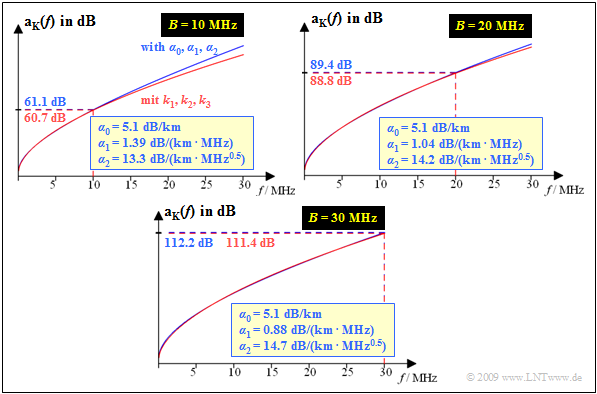 For this case the following graph shows

One recognizes from these representations:

With this result,  $k_2$  can be calculated using either of the two equations given above.

Impulse response of a two-wire line

Here,  the following abbreviations are used:

The meaning of the quantities implicitly defined here will be discussed a little later.

We proceed quite formally here first.  According to the  convolution theorem,  the resulting impulse response is the  Fourier retransform  of  $H_{\rm K}(f)$:

These five components are now to be considered separately, with the numerical results referring to

The phase function per unit length of this line is also given in  [PW95][1]:

Interpretation and manipulation of the individual impulse responses

(6)   Before we unnecessarily lead the reader to consider whether this approximation is indeed valid or not,  we freely admit right away that this assumption is the weak point of our reasoning.  A discussion of this faulty assumption follows in the  next secction. 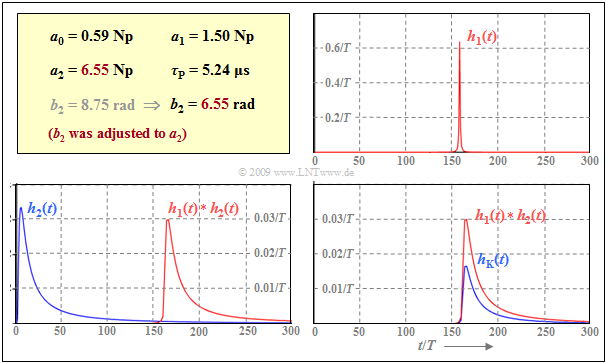 For calculating the impulse response of a two-wire line

The resulting impulse response  $h_{\rm K}(t)$  of the 0.4mm two-wire line is shown as a blue curve in the lower right diagram.  The difference to the convolution product  $h_1(t) ∗ h_2(t)$  drawn in red results from the influence of the DC signal attenuation $($coefficient  $α_0)$.

You can illustrate the presented method for arbitrary parameters (diameter, length, bit rate) with the (German language) interactive SWF applet

Discussion of the approximate solution found 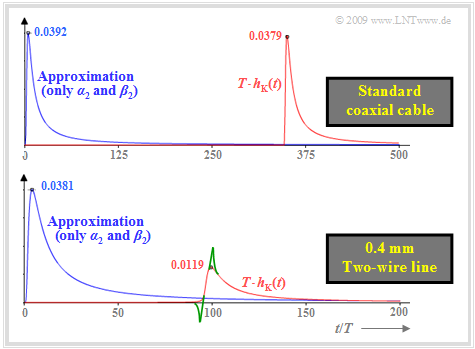 From these representations, one can further see: 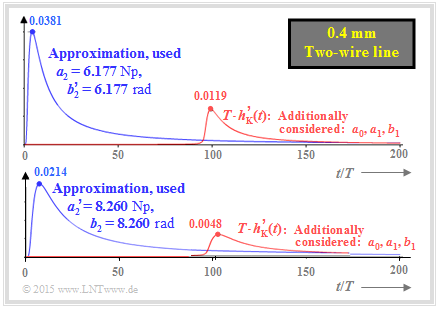 Without the correction  $b_2\hspace{0.01cm}' = a_2 · \text{rad/Np}$,  the  Hilbert Transformation, which establishes the relationship between magnitude and phase in real and thus establishes  minimum-phase systems,  would not be satisfied.  Therefore,  it would result in a noncausal impulse response.

We therefore believe that even for a two-wire line, the two parameters  $a_2$  and  $b_2$  should have equal numerical values.

We now consider a second approach,  shown in the diagram below:

For transmission systems over two-wire lines,  the same  block diagram  can be assumed as for the coaxial cable systems,  where now

By twisting the wire pairs of a star quad as well as the basic and main bundles according to the diagram at the end of the chapter  Access network of a telecommunications system  an attempt is made to achieve on average a mutual coupling as symmetrical as possible between all wire pairs.  Due to unavoidable manufacturing tolerances,  however,  a slight asymmetry always remains.  This causes 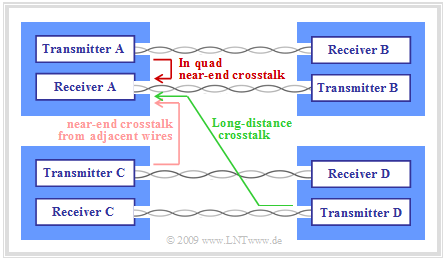 As the diagram illustrates, a distinction is made between

In the case of  "FEXT",  the interference accumulates over the entire cable length,  but is also greatly attenuated by the cable attenuation.  For bundled cables in the local loop area,  "in quad crosstalk"  thus results in orders of magnitude greater interference than long-distance crosstalk,  and even near-end crosstalk interference from adjacent cores can usually be neglected.

$\text{Without derivation:}$  We therefore consider only  $\text{Near-End Crosstalk (NEXT)}$  in the following.  In this case, the  power-spectral density  $\rm (PSD)$  of the interference signal  $n(t)$  can be represented as follows, taking into account the unavoidable thermal noise  $(N_0/2)$ :

It should be noted about this equation: