All digital receivers described so far always make symbol-wise decisions.  If,  on the other hand,  several symbols are decided simultaneously,  statistical bindings between the received signal samples can be taken into account during detection,  which results in a lower error probability – but at the cost of an additional delay time.


In this  $($partly also in the next chapter$)$  the following transmission model is assumed.  Compared to the last two chapters,  the following differences arise:

The  (unconstrained)  optimal receiver is called the  "MAP receiver",  where  "MAP"  stands for  "maximum–a–posteriori".

A further simplification of this MAP decision rule leads to the  "ML receiver",  where  "ML"  stands for  "maximum likelihood".

A comparison of these two definitions shows:

For clarification of MAP and ML receiver

We now assume that the received signal  $r(t)$  is additively composed of a useful component  $s(t)$  and a noise component  $n(t)$,  where the noise is assumed to be Gaussian distributed and white   ⇒    "AWGN noise":

Any channel distortions are already applied to the signal  $s(t)$  for simplicity.


The necessary noise power limitation is realized by an integrator;  this corresponds to an averaging of the noise values in the time domain.  If one limits the integration interval to the range  $t_1$  to  $t_2$,  one can derive a quantity  $W_i$  for each source symbol sequence  $Q_i$,  which is a measure for the conditional probability  ${\rm Pr}\big [ r(t)\hspace{0.05cm} \vert \hspace{0.05cm} Q_i\big ] $:

This decision variable  $W_i$  can be derived using the  $k$–dimensionial  "joint probability density"  of the noise  $($with  $k \to \infty)$  and some boundary crossings.  The result can be interpreted as follows:

There are various circuit implementations of the maximum likelihood  $\rm (ML)$  receiver.

⇒   For example,  the required integrals can be obtained by linear filtering and subsequent sampling.  This realization form is called  matched filter receiver,  because here the impulse responses of the  $M$  parallel filters have the same shape as the useful signals  $s_0(t)$, ... , $s_{M-1}(t)$.

⇒   A second realization form is provided by the  correlation receiver  according to the following graph.  One recognizes from this block diagram for the indicated parameters: 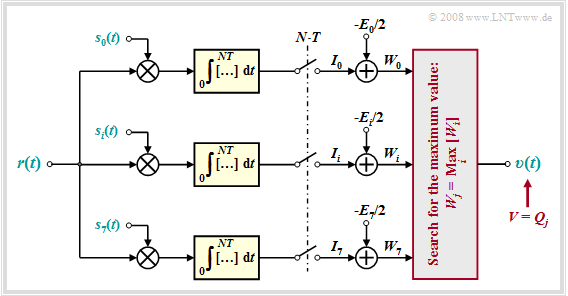 Representation of the correlation receiver in the tree diagram

Let us illustrate the correlation receiver operation in the tree diagram,  where the  $2^3 = 8$  possible source symbol sequences  $Q_i$  of length  $N = 3$  are represented by bipolar rectangular transmitted signals  $s_i(t)$.

$\text{Example 2:}$  The graph shows the continuous-valued integral values,  assuming the actually transmitted signal  $s_5(t)$  and the noise-free case.  For this case,  the time-dependent integral values and the integral end values: 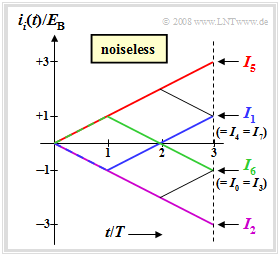 Tree diagram of the correlation receiver in the noise-free case

The graph can be interpreted as follows: 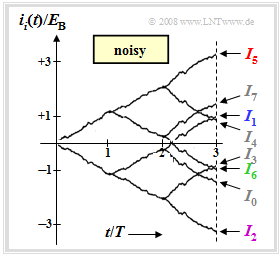 One can see from this graph compared to the noise-free case:

So far,  we have always assumed binary  bipolar  signaling when describing the correlation receiver:

By comparing with the  "corresponding table"  for bipolar signaling,  one can see:

For this example,  the following comparison values result,  each normalized to  $E_{\rm B}$: