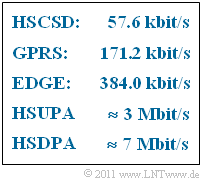 Shortly after the first release of  GSM  and  UMTS, there were already efforts to significantly increase the speed of data transmission.  The following standardized system variants were developed:

HSUPA and HSDPA are also combined to form  "High-Speed Packet Access"   ⇒   $\rm HSPA$.  The above chart shows the data transmission rates of these advanced mobile communications standards, whereby we specify so-called  "peak data rates"  for HSCSD, GPRS and EDGE, which were difficult to achieve under real conditions  (at least in this year 2012).

The indicated rates for HSUPA and HSDPA are now quite realistic.

(5)  Correct are all proposed solutions:

(6) All solution suggestions are correct: