$\rm GSM$  $\rm (G$lobal  $\rm S$ystem  for  $\rm M$obile Communication$)$  is a strongly hierarchically structured system of different network components.  You can see from the graphic: 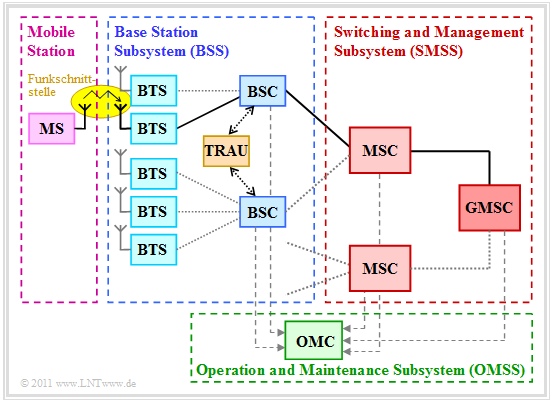 More detailed information on GSM system architecture and the individual network components can be found in the chapter  General Description of GSM  of the book "Examples of Communication Systems". 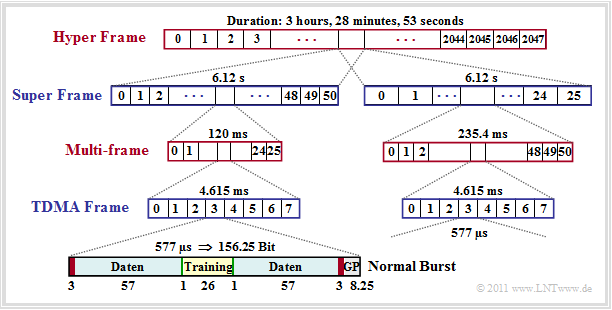 Realization of FDMA and TDMA with "GSM 900"

The graphic and the following description is valid for the original system "GSM 900" (in the following:  "GSM–D").

Data and frame structure for GSM 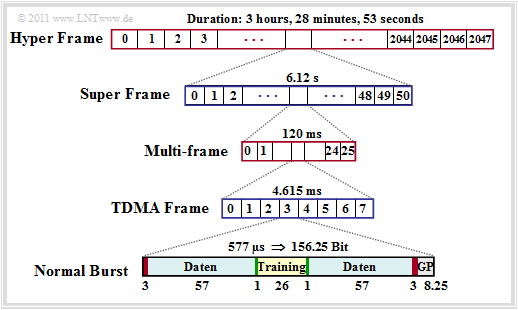 Data and frame structure for GSM

You can see from this graphic:

With GSM, only a bandwidth of  $B = 200 \ \rm kHz$  is available per frequency channel, in which a total data rate (for eight users) of  $R_{\rm total} = 270.833 \ \rm kbit/s$  must be transmitted.  Required is therefore a modulation method with a bandwidth efficiency of at least

GSM uses the very bandwidth-efficient modulation method  Gaussian Minimum Shift Keying  $\rm (GMSK)$.  It should again be expressly mentioned that this modulation method, just like the FDMA/TDMA multiple access, is exclusively based on the air interface between the mobile station  $\rm (MS)$  and the base transceiver station   $\rm (BTS)$, which is highlighted in yellow in the  system architecture graphic  at the beginning of the chapter.


GMSK has already been described in chapter  Properties of nonlinear modulation methods  of the book "Modulation Methods".  The most important properties are briefly summarized here.

Regarding the topic treated here  (coherent or non-coherent demodulation of FSK)  we refer to two Exercises in the book "Digital Signal Transmission":

$\text{Example 1:}$  The following graphic is to clarify the previous statements: 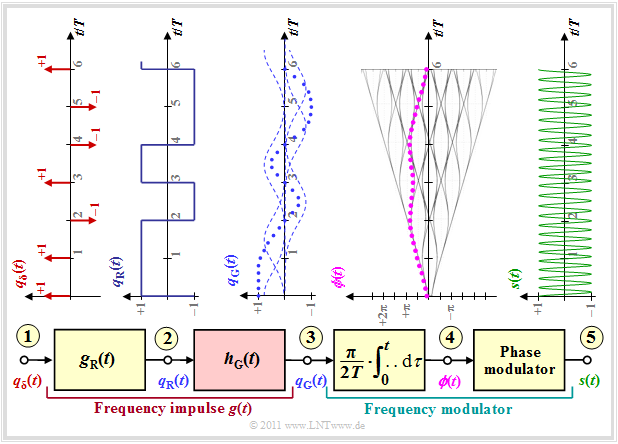 block diagram and signals with GMSK

Note:   The GMSK signal contains much more than just two discrete frequencies.  Its power-spectral density decreases very fast, see  Diagram  in the book "Examples of communication systems".  From the above time representation at point  $(5)$  of the block diagram this fact is difficult to recognize.

GSM was designed and developed as a European mobile radio system for telephone calls with the additional option of data transmission, but only at a low data rate  $(9.6 \ \rm kbit/s)$.  The standardization of the  $\text{GSM-Phase 2}$  however, from 1995 on, already included first further developments and some new additional services, already known from ISDN and appreciated by the users.

With the combination of GPRS and EDGE – one speaks then of  $\text{E-GPRS}$  – there are nine different  Modulation and Coding Schemes  $\rm (MCS)$, between which the operator can choose: