Similarities Between GSM and UMTS 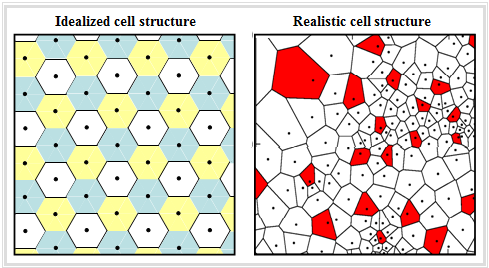 A characteristic feature of GSM and UMTS is the cellular network structure, which is often approximated by hexagons  (see left graphic on the right): 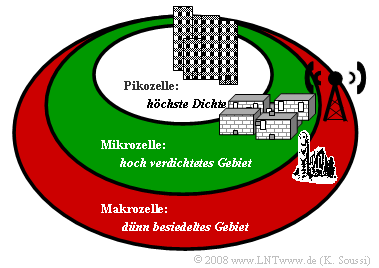 If several subscribers use the same frequency channel, interference may occur and thus a very low carrier–to–interference ratio  $\rm (CIR)$,  which considerably impairs the transmission quality.  The problem is serious in the case of UMTS, which is based on the multiple access method  CDMA  ("Code Division Multiple Access"), since here all participants use the same frequency channel. 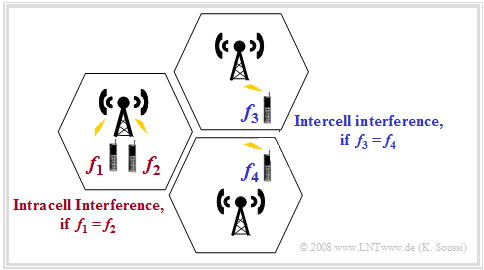 To illustrate intra- and intercellular interference

A distinction is made between two types of interference according to the graphic:

In contrast, in the case of intracell interference, each user must be regulated individually, for example by reducing transmission power and/or data rate.

The Near–Far effect is exclusively a problem of the uplink, i.e. the transmission of mobile users to a base station.  We consider a scenario with two users at different distances from the base station  ("Node B")  according to the following graphic.

Scenarios for the Near-Far effect

Note:   In an idealized system  $($one–way channel, ideal A/D converters, completely linear amplifiers$)$  the transmitted data of the users are orthogonal to each other and one could detect the users individually even with very different receiving powers.

This statement is valid for GSM due to the multiple access methods FDMA and TDMA, but also for UMTS (CDMA) and for the 4G system LTE (TDMA/OFDMA).


In reality, however, orthogonality is not always given due to the following reasons:

Consequently, the users are no longer orthogonal to each other and the signal-to-noise ratio of the user to be detected is not arbitrarily high compared to other users:

To avoid the Near–Far effect according to the right graph on the last page, however, a sufficiently good power control is required.  It should be noted here:

A second problem besides the Near–Far effect occurs when a mobile user switches from one cell to another.  In order to make the transition between different cells appear as uninterrupted as possible to the user, a so–called  "Handover"  is used for circuit–switched UMTS services and for GSM.  A distinction is made between two types:

$\text{Example 1:}$  The graphic shows a downlink scenario where a mobile station can receive its signal from two different base stations  $(\rm BS1$  and  $\rm BS2)$  at certain locations.

Handover scenarios for the downlink

These statements can also be applied to the right-hand scenario, in which the base station radiates with directional antennas in three sectors.  Here it is assumed that the radiation angle is somewhat larger than  $120^\circ$, which can be assumed in practice.

In the  "UMTS downlink"  the data is split in the "Radio Network Controller"  $\rm (RNC)$, broadcast via different base stations and reassembled in the mobile station ("Rake Processing").

In the  "UMTS uplink"  the transmitted data is received by all participating base stations.  The data is combined ("Soft Combining") in the RNC. The RNC then forwards the data to the "Core Network"  $\rm (CN)$.  A distinction is made here:

Now some components of mobile radio systems, which are necessary for both GSM and UMTS, will be explained.

Components of the voice and data communication with GSM

Let us first look at the  $\text{GSM voice transmission}$, i.e. the upper branch of the graphic:


Interleaving is also organized differently for data than for voice. The effective data rate of  $22.8 \ \rm kbit/s$  after interleaving is the same for both branches. The rest of the description applies to voice and data equally:

An essential  $\text{difference between GSM and UMTS}$  are the different modulation and multiple access methods:

The following points should also be noted:

$\text{Conclusion:}$  With  $\rm GSM$  and  $\rm UMTS$  the following problems in particular are to be solved together:

To keep the sampling theorem with a certain tolerance, the audio signal is limited by filtering to the frequency range from  $300\ \rm Hz$  to  $3.4\ \rm kHz$.  The necessary compression by the factor  $8$  is the task of the  Speech coding  (this is a special form of the  Source coding), for which several standards were defined in the 1990s:

From the  "ACELP block diagram"  one recognizes

In the chapter  Voice Coding  of the book "Examples of Communication Systems" the EFR Codec is described in detail.  The data rate of  $12.2 \ \rm kbit/s$  is identical to the highest mode of the AMR codec, which is briefly introduced on the next page.

The most widely used voice encoder due to its flexibility is the AMR codec ("Adaptive Multi–Rate"), which processes low-frequency signals  $($in the frequency range between  $300\ \rm Hz$  and  $3.4\ \rm kHz)$  according to the ACELP principle.  This encoder provides eight different modes with data rates

Modes of the AMR and Wideband AMR

Three modes play a special role  (highlighted darker in the first line of the table), namely

The AMR codec is used in the same way for GSM and UMTS.

Exercise of the chapter