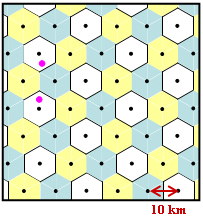 A characteristic of GSM and UMTS alike is the cellular network structure, whereby for simple calculations the cells are often approximated by hexagons. 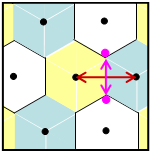 (3)  The sketch illustrates the calculation process with regard to the "white frequencies", where  $d_{\rm min}$  is given by the purple arrow.

(4)  Correct are both solutions:

(5)  Correct are the both first solutions: