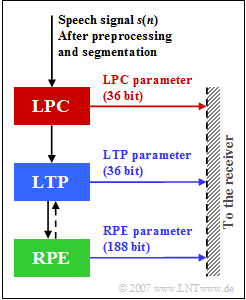 LPC, LTP and RPE parameters in the GSM Full-Rate Vocoder

This codec called "GSM Full-Rate Vocoder"  (which was standardized for the GSM system in 1991)  stands for a joint realization of coder and decoder and combines three methods for the compression of speech signals:

The numbers shown in the graphic indicate the number of bits generated by the three units of this Full-Rate speech codec per frame of  $20$  millisecond duration each.

It should be noted that LTP and RPE, unlike LPC, do not work frame by frame, but with sub-blocks of  $5$  milliseconds.  However, this has no influence on solving the task.

The input signal in the above graphic is the digitalized speech signal  $s_{\rm R}(n)$.

This results from the analog speech signal  $s(t)$  by

The further tasks of preprocessing will not be discussed in detail here.

(4)  The first two statements are true:

More details about the RPE block can be found on the page  RPE coding  of the book  "Examples of Communication Systems".