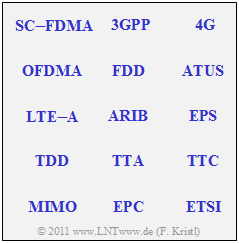 The development of new "releases" is constantly being driven forward by  $\text{3GPP}$.  This international consortium, which includes all major mobile operators and manufacturers worldwide, will continue to play a prominent role in mobile communications in the future.

Currently (2017)  $\rm 5G$  is the all-dominant buzzword.  However, the author does not allow himself any more precise statements about the time of introduction than "very soon" or "as soon as possible".  More detailed information can be found  here.

(1)  Correct are the answers 1 to 3, which also stand for the most important improvements through LTE: