Chair holders of the LNT since 1962 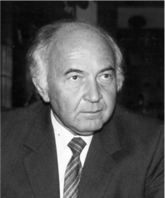 Hans Marko, born on February 24, 1925 in Kronstadt/Siebenbürgen, studied communications engineering at the TH Stuttgart and received his doctorate in 1953 under Ernst Feldtkeller.  He then worked at Standard Elektrik Lorenz AG, where he developed one of the first pulse code modulation systems in Germany.  At this time he was already lecturing at the universities of Stuttgart and Karlsruhe.  In 1961, he wrote his post-doctoral thesis on the utilization of telegraph channels for information transmission.

In 1962, at the age of only 37, Hans Marko succeeded Hans Piloty as head of the  "Lehrstuhl für Nachrichtentechnik"  (LNT)  at the  "Technische Hochschule München"  (today:  Technical University of Munich, TUM)  and worked successfully in teaching and research for 31 years until his retirement.  He supervised nine habilitations and 75 doctorates.

The scientific fields he and his institute worked on included

Hans Marko is the author of several books and more than one hundred publications as well as numerous patents. He has received many high-ranking honors:

After his retirement in 1993, Hans Marko has always remained connected to his former institute, both to his direct successor  Joachim Hagenauer  as well as his successors  Ralf Kötter  and  Gerhard Kramer.  Of particular note in this context was his participation in a workshop in May 2012, at which, at the age of 87, he discussed his findings on "bidirectional communication" obtained 40 years ago with the pioneer James Massey and other leading researchers in this field.

Hans Marko's contribution to the LNTwww  results from the fact that our authors  Klaus Eichin,  Norbert Hanik  and  Günter Söder  did their PhD with him. 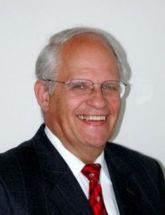 The beginning of the LNTwww falls during Hagenauer's time as chair of the LNT.

We thank Professor Joachim Hagenauer for his constant support of our e-learning project. 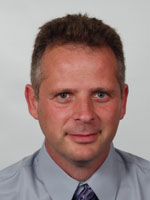 Ralf Kötter, born on October 10, 1963 in Königstein/Taunus and deceased on February 2, 2009 in Munich, was a German professor in the field of "electrical engineering and information technology" whose numerous works in the field of network coding were of central importance for the further development of mobile communications despite his early death.

Ralf Kötter worked in the field of algebraic coding theory and was one of the first scientists to use graph theory to develop error control codes. For his work on decoding Reed-Solomon codes, he was awarded the Best Paper Award of the IEEE Information Theory Society in 2004. In 2008, he received the Best Paper Award of the Signal Processing Society for his work on turbo equalization. In addition, he was awarded the 2008 Vodafone Foundation Innovation Award for Research for his "seminal work" on information and coding theory.

Ralf Kötter died at the age of only 45, leaving behind his wife Nuala (who also died of cancer just under 5 years after him) and his then 4-year-old son Finn.

The Department for Electrical and Computer Engineering at his former university in Illinois established the Ralf Koetter Memorial Fund in Electrical and Computer Engineering after his death to support students in the department. Ralf's parents Ruth and Hubert Koetter endowed the "Prof. Dr. Ralf Koetter Memorial Award" in 2010, which will be awarded annually until 2023.

Ralf Kötter has been very supportive of the further development of the LNTwww  in his unfortunately very short time at LNT.

We will always keep Ralf in good memory. 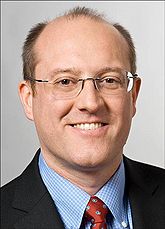 Gerhard Kramer, born in 1970 in Winnipeg, Canada, is Alexander von Humboldt Professor and has been full professor of the Department of Communications Engineering (LNT) at the Technical University of Munich (TUM) since 2010 and its Vice President since 2019. He received the B.Sc. in 1991 and the M.Sc. in 1992 in electrical engineering from the University of Manitoba, Winnipeg, Canada. In 1998, he was awarded the Dr. sc. techn. degree (Doctor of Technical Sciences) from the Swiss Federal Institute of Technology (ETH) Zurich.

From 1998 to 2000, Gerhard Kramer worked at Endora Tech AG, Basel, as a communications engineer. From 2000 to 2008 he was a Member of Technical Staff at the Math Center, Bell Laboratories, Alcatel-Lucent in Murray Hill/New Jersey. In 2009, he moved to the University of Southern California (USC) in Los Angeles/California as a professor.

Kramer's research focuses on information theory and communication theory with applications to both wireless and wired networks over copper and fibre respectively.

During Gerhard Kramer's tenure (since 2010) the  "German LNTwww"   was completed and he initiated the English version in 2020.

The LNTwww team would like to thank Gerhard Kramer for his great support of our e-learning project.