The second main chapter deals with so-called  transmission coding,  which is sometimes also referred to as  "line coding"  in literature.  In this process,  an adaptation of the digital transmission signal to the characteristics of the transmission channel is achieved through the targeted addition of redundancy.  In detail,  the following are dealt with:

The description is in baseband throughout and some simplifying assumptions  (among others:  no intersymbol interfering)  are still made.

We assume an  $M$–level digital source that outputs the following source signal:

According to this definition,  which goes back to  "Claude E. Shannon",  the smaller the probability of occurrence of a symbol,  the greater its information content.

$\text{Definition:}$  Entropy  is the  "average information content"  of a sequence element  ("symbol").

From the derivation of these descriptive quantities,  it is obvious that a redundancy-free  $(r=0)$  digital signal must satisfy the following properties:


A distinction is made between different types of coding depending on the target direction:

In the current book  "Digital Signal Transmission"  we deal exclusively with this last,  transmission-technical aspect.

Block diagram for the description of multilevel and coded transmission systems Korrektur bzw.

Detailed information about the 4B3T codes can be found in the  "chapter of the same name".

ACF calculation of a digital signal 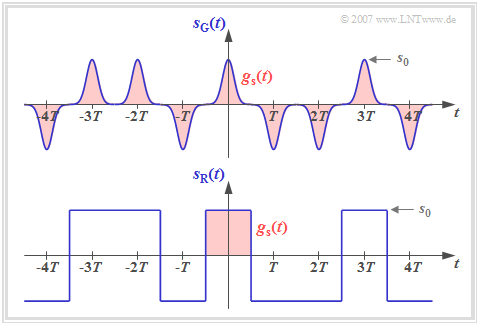 It can be seen from this figure that a digital signal is generally non-stationary:

Many of the rules valid for  "ergodic processes"  can also be applied to  "cycloergodic"  (and hence to  "cyclostationary")  processes with only minor restrictions.

Now the following quantities are introduced for abbreviation:

PSD calculation of a digital signal 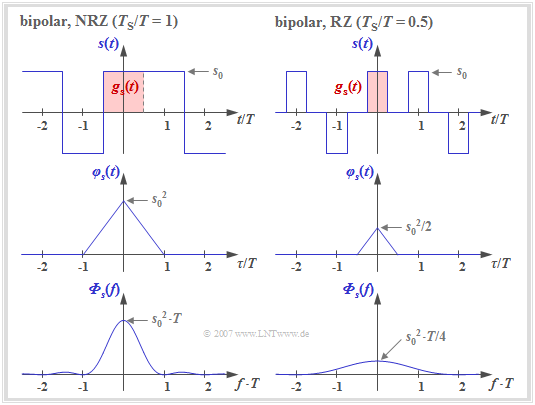 The graph shows two signal sections each with rectangular pulses  $g_s(t)$,  which accordingly lead to a triangular auto-correlation function  $\rm (ACF)$  and to a  $\rm sinc^2$–shaped power-spectral density  $\rm (PSD)$.

One can see from the left representation  $\rm (NRZ)$: 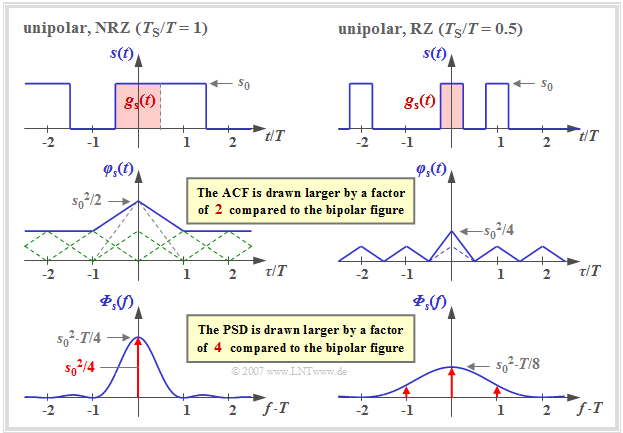 
The graph shows a signal section, the ACF and the PSD with unipolar amplitude coefficients,

There are the following differences compared to  "bipolar signaling":

Exercise 2.1: ACF and PSD with Coding

Exercise 2.1Z: About the Equivalent Bitrate