In transmission coding,  a distinction is made between two fundamentally different methods:

Details can be found in the chapter  "Symbolwise Coding with Pseudo-Ternary Codes".

More detailed information on the block codes can be found in the chapter  "Block Coding with 4B3T Codes".

A special case of a block code is a  redundancy-free multilevel code.

Thus,  the relative redundancy is given by:

To simplify the notation and to align the nomenclature with the "first main chapter",  we use in the following

This results in the identical form for the transmitted signal as for the binary transmission,  but with different amplitude coefficients:

$\text{Example 2:}$  The graphic above shows the quaternary redundancy-free transmitted signal  $s_4(t)$  with the possible amplitude coefficients  $\pm 1$  and  $\pm 1/3$,  which results from the binary source signal  $q(t)$  shown in the center. 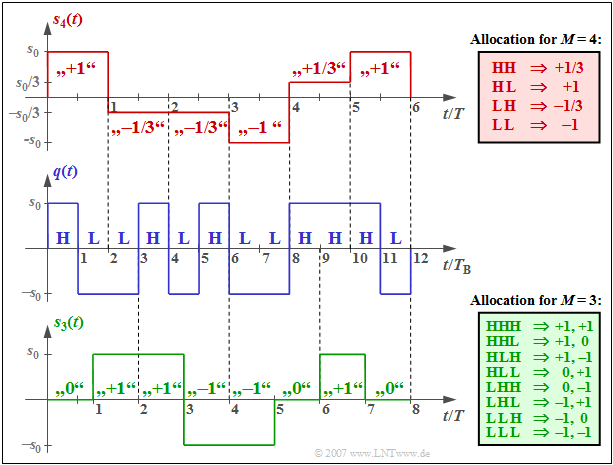 The lower plot shows the $($almost$)$ redundancy-free ternary signal  $s_3(t)$  and the mapping of three binary symbols each to two ternary symbols.

ACF and PSD of a multilevel signal

For a redundancy-free coded  $M$–level bipolar digital signal  $s(t)$,  the following holds for the  "discrete auto-correlation function"  $\rm (ACF)$  of the amplitude coefficients and for the corresponding  "power-spectral density"  $\rm (PSD)$:

Considering the spectral shaping by the basic transmission pulse  $g_s(t)$  with spectrum  $G_s(f)$,  we obtain:

One can see from these equations:

Error probability of a multilevel system

The diagram on the right shows the eye diagrams

Here,  a cosine rolloff characteristic is assumed for the overall system  $H_{\rm S}(f) \cdot H_{\rm K}(f) \cdot H_{\rm E}(f)$  of transmitter, channel and receiver,  so that intersymbol interference does not play a role.  The rolloff factor is  $r= 0.5$.  The noise is assumed to be negligible.

The eye diagram is used to estimate intersymbol interference.  A detailed description follows in the section  "Definition and statements of the eye diagram".  However,  the following text should be understandable even without detailed knowledge.


It can be seen from the above diagrams:

Taking into account the occurrence probabilities  $(1/4$  for equally probable symbols$)$  and the six possibilities of falsification (see arrows in the graph),  we obtain:

$\text{Conclusion:}$  In general, the  symbol error probability  for  $M$–level digital signal transmission is:

For this system comparison under fair conditions,  the following are assumed:

Substituting these equations into the general result on the  "last section",  we obtain for the symbol error probability: 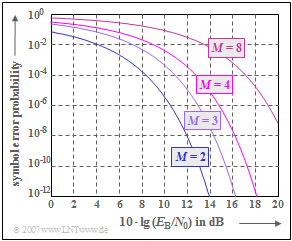 $\text{System comparison under the constraint of power limitation:}$  The above curves can be interpreted as follows:

The diagram illustrates these two definitions and is also valid for the next chapters.  The block  "encoder"  causes

$\text{Example 4:}$  We consider a quaternary transmission system whose transmission behavior can be characterized as follows  (see left sketch in the graphic):

To calculate the bit error probability,  one must also consider the mapping between the binary and the quaternary symbols:

The factor  $1/2$  takes into account that a quaternary symbol contains two binary symbols.