$\text{Definition:}$  The term  $\text{spectral leakage effect}$  is used to describe the distortion of the spectrum of a periodic and thus temporally unlimited signal due to the implicit time limit of the Discrete Fourier Transform (DFT).  This means that, for example, a spectrum analyzer

The following  $\text{Example 1}$  will show that for a periodic signal the application of the  Discrete Fourier Transform  $\text{(DFT)}$  is not useful without additional measures.  The quality of the spectral analysis – i.e. the correctness of the spectrum found – is mainly determined here by the (more or less successful) adaptation of the DFT parameters to the signal parameters at hand.

On the next pages the spectral leakage effect will be illustrated by examples and the advantages and disadvantages of the different window functions will be discussed.

So much up front:  There is no  "best"  window function for all applications. 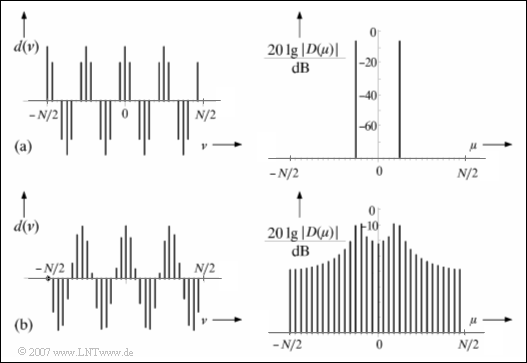 On the right the frequency discrete spectrum  $\vert D(\mu) \vert$  after a DFT with  $N = 32$  samples is shown in logarithmic form (in dB) , from which the further DFT parameters result as follows:

Since the interval width  $T_{\rm P}$  captures an integer multiple of the period  $T_0$ , the DFT delivers the correct result. The two Dirac functions lie exactly at  $\pm4 \cdot f_{\rm A}$.

The occurrence of such unwanted side lobes is now to be explained using the following diagram. This graphic was also taken from the book  [Söd93][1] 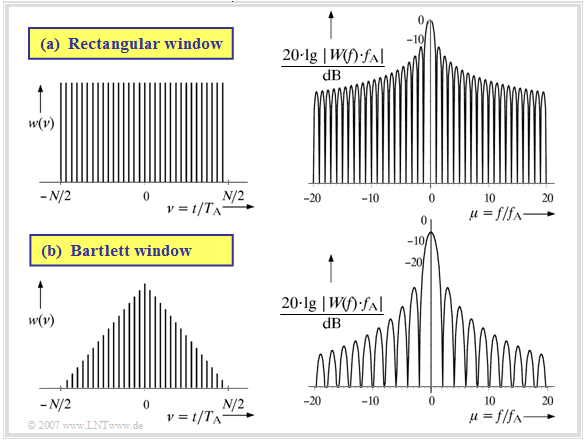 First consider the upper graph  (a)  for the  rectangular window.

The discontinuities in the time domain caused by limitation and periodic continuation are reduced if, instead of the constant one weighting by the rectangle, the two edge areas of the window are weighted weaker than the centre.

Consider the graph  (b)  for the  Bartlett window - also called  "triangular window":

will be described by means of graphs and equations contained therein. For the running variable in the time domain, $-N/2 ≤ \nu < N/2$ always applies.

The suitability of these window functions for various tasks of spectral analysis is mentioned on the next page. 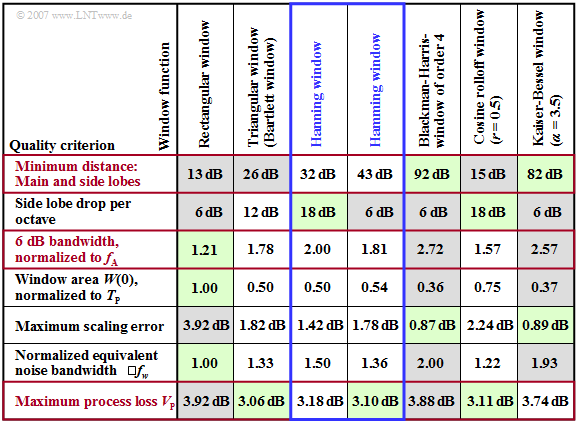 The table shows quality criteria for the window functions described on the last pages.  The selection of a suitable window function should be made according to the following aspects:

These most important quality criteria are highlighted in red in the adjacent table.

Now the quality criteria given in the table are described in more detail:

This combined quality criterion considers the  maximum scaling error  as well as the (normalised)  equivalent noise bandwidth.  The maximum process loss is usually given in  $\text{dB}$  and should be rather small according to its name:

The two proportions are to be interpreted as follows:

$\text{Conclusion:}$  The results of this section can be summarised as follows:

Exercise 5.4Z: On the Hanning Window