# SYNOPSIS OF THE FIRST MAIN CHAPTER #

The first main chapter deals with time-variant transmission channels, a property that is of great importance for mobile communication.  The description is given throughout in the equivalent low-pass range.

It deals in detail with the following topics:

Example for a mobile radio scenario

The figure shows a typical mobile radio scenario with a fixed base station and a mobile subscriber moving towards the base station at the speed  $v$ .

In this representation, the radio signal reaches the mobile station via a direct path.

However, the antenna of the mobile subscriber also receives other signal components that reach the receiver in a detour, for example

This scenario can be used to explain important problems in mobile communications:

In this chapter we will take a closer look at path loss and shadowing effects.  The following chapters deal with time variance, also taking into account the Doppler effect.  The second main chapter describes multipath propagation, which results in echoes in mobile radio.

One speaks of  "free-space propagation"  when there is a line of sight between the transmitter and the receiver positioned at a distance  $d$  as in satellite communications or in space.  The radio waves propagate in  "empty space"  unhindered spherically around the transmitting antenna, but are attenuated with increasing distance due to the energy conservation law.


Geometrically you can imagine that the radius  $R$  of the sphere and thus also the spherical surface become larger and larger and at constant total energy the energy per unit area becomes proportional to  $1/R^2$  smaller and smaller.

Usually the free-space attenuation is specified logarithmically with the pseudo unit "dB".

It should be noted about this equation:

In contrast to satellite and radio relay links, in the case of land mobile radio in addition to free-space attenuation, other disturbing effects must be taken into account which also contribute to a reduction in reception power, namely:

The effects mentioned here are responsible for the fact that mobile radio can be operated without direct line of sight  $\rm (LOS)$, and thus one of the bases for the economic success of mobile radio systems.  Negatively, these effects are caused by a lower reception power, which must be taken into account by a larger exponent than  $\gamma = 2$ .  We then no longer speak of  "free-space attenuation",  but generally of  "path attenuation factor":

The corresponding dB–magnitude we call the  path loss   $(\rm lg$ is the logarithm to the base $10)$:

The relatively simple path loss model shown on the last page is well suited for macro cells, but requires high base station antennas.  It was used, for example, as a reference–scenario for the standardization of  Long Term Evolution  $\rm (LTE)$.


Of course, this very simple two–parameter model  $(V_0, \ \gamma)$  cannot reproduce all use cases with sufficient accuracy.  A large number of other models for power attenuation can be found in the literature, which are more precisely adapted to specific boundary conditions  (neighbourhood)  and also take different cell sizes into account.  Well-known are for example, see  [Gol06][3]: 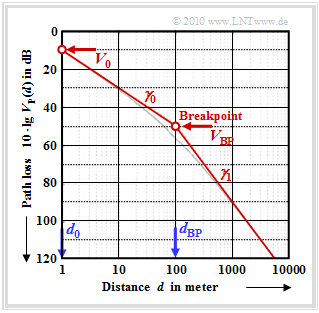 To simplify matters, the asymptotic approximation shown in red in the graph is used


Note:   In the  Excercise 1.1  this model is still being examined in detail.

Additional loss due to shadowing

The disturbing influence of shadowing is explained with the help of a graphic, taken from the lecture manuscript   [Hin08][4]: 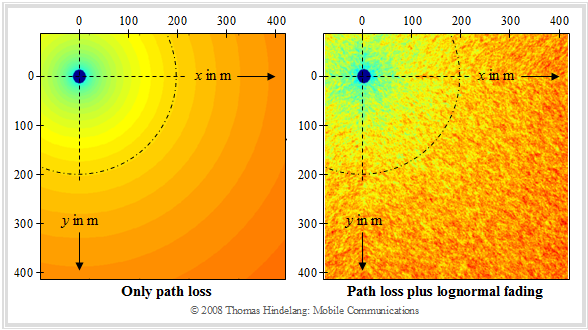 Path loss without and with consideration of shading

The effects of shadowing can be summarised as follows:

However, such channel changes are very slow due to shading.   Often the conditions remain the same for several seconds and one speaks here of  "Long Term Fading"  in contrast to fast fading like  Rayleigh fading  and  Rice fading. 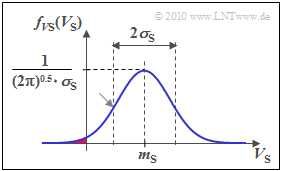 To account for the loss  $V_{\rm S}$  by shadowing, the system design must be based on statistical models that have emerged from empirical studies.

The best known is the  lognormal channel model, which uses a  Gaussian PDF  for the random variable  $V_{\rm S}$:

The name  "lognormal"  results from the fact that the dB–magnitude  $V_{\rm S}$, which is derived from the linear power attenuation factor via the logarithm, is normally distributed (and thus Gaussian).


The lognormal channel model is determined by two parameters:

Note that  $V_{\rm S}$  can also take negative values when using lognormal fading   (red area in the above graphic), which actually contradicts the idea of shading.  In practice, however, this model has proven to be very good.

The  "gain by shading"  could be interpreted as follows:

$\text{Conclusion:}$  It is useful to summarize the path loss portions in the following way:

The distance dependency of  $V_1$  does not play a major role and will not be further discussed here.

The figure shows a time domain model, with the help of which the path loss  $V_{\rm P}$  can be simulated according to the above equation.  Please note: 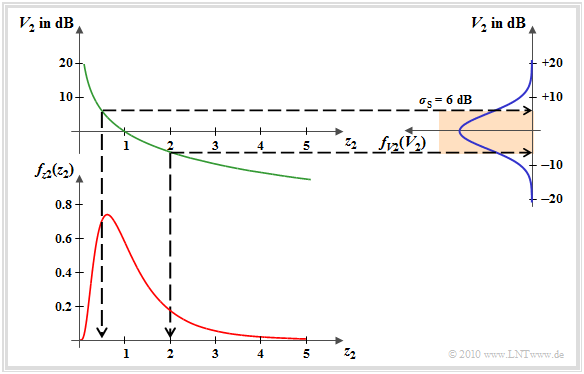 The graphic illustrates the transformation.  You can see

Requirements for the following chapters

The average power of all signal components arriving at the receiver can be calculated using path loss and shading models.

Paths can overlap constructively or destructively. The associated changes occur locally in the range of half the wavelength.  In mobile radio, a few centimeters are enough to find completely different reception conditions.  One speaks of   Fast Fading.  Such a channel is basically frequency–dependent and time–dependent. 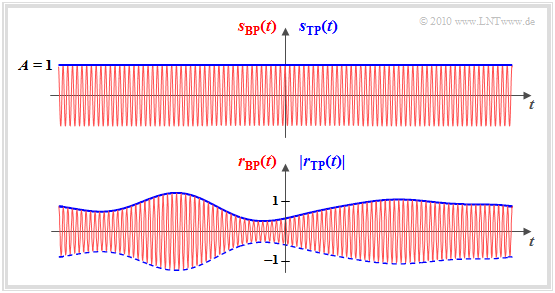 Signals  $s(t)$  and  $r(t)$  for the description of the mobile radio channel in band-pass range (red) and in the equivalent low-pass range (blue); for the sketch  $ϕ(t)\equiv 0$

For the rest of this first main chapter, frequency dependence is eliminated by assuming a single fixed frequency (see graph).

$\text{Conclusion:}$  For the  physical signal at the output of the mobile radio channel  ⇒   band-pass reception signal  always applies in the following: