Differences and Similarities of Low-Pass and Band-Pass Signals

In the third main chapter   ⇒   Aperiodic Signals – Pulses  often  "low-pass signals"  were assumed   ⇒   those signals whose spectral functions lie in the range around the frequency  $f = 0$.  Particularly in optical transmission and in radio transmission systems - but not only in these - the transmitted signals are in the range around a carrier frequency  $f_{\rm T}$.  Such signals are called  "band-pass signals".

This chapter contains in detail:

In the previous chapters of this book, only signals have been considered whose spectra lie in a narrow range around the frequency  $f = 0$.  Examples are analog speech, music and image signals, which all - despite their different bandwidths - can be described as  "low-pass signals".

If you want to transmit such a low-pass signal to a spatially distant sink, the signal may have to be converted to another frequency position.

There can be several reasons for this:

$\text{Remember:}$  The transmitted signals of many transmission methods are  $\text{band-pass signals}$.

(a)     Speech and music are low-pass signals with a bandwidth of  $\text{20 kHz}$  (at very good quality).  Since a radio transmission is only possible from  $\approx \text{100 kHz}$,  a conversion is needed to carrier frequencies between

(b)     TV image signals  have a larger bandwidth,  e.g.  $\text{5 MHz}$.  Here, as well, a frequency band shift occurs before the sound and image transmission due to carrier frequencies between

Regarding the graphic is to be remarked:

This example shows that there is no clear mathematical distinction between low-pass and band-pass signals.

You can see from this diagram:

$\text{Example 3:}$  The red curves in the two graphs show the band-pass spectrum  $X_{\rm BP}(f)$  and the corresponding time function

Low-pass and band-pass spectrum and their signals

Also shown are two low-pass spectra and signals.  You can see from these diagrams:

If this signal is multiplied by a (dimensionless) harmonic oscillation

From spectral function on the right you can clearly see that

is a band-pass signal.

You can further see from the above graphic: 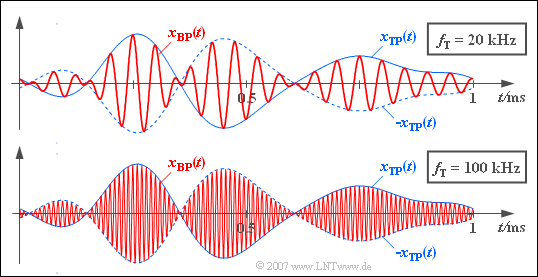 The corresponding spectrum  $X_{\rm TP}(f)$  is complex because of the non-zero phase positions.

The topic of this chapter is covered in the (German language) learning video  "Eigenschaften von Tiefpass- und Bandpass-Signalen"  ⇒  "Properties of low-pass and band-pass signals".

Exercises for the Chapter