The first main chapter introduces the broad field of digital signal transmission,  with some simplifying assumptions:  a redundancy-free binary transmitted signal,  no intersymbol interference.  Although the description is mainly in baseband, most of the results can be applied to the digital carrier frequency systems as well.

In particular,  the following are dealt with:

Throughout the first chapter,  » the following block diagram is assumed for the digital system as described in  [TS87][1]:

The block diagram is constructed in exactly the same way as a  analog transmission system  according to the description in the book  "Modulation Methods"  - consisting of.

In comparison to an analog transmission system,  the following similarities and differences can be recognized in this simplified system model:

In the following,  the characteristics of the individual system components are described in detail,  suitably considering the idealizing assumptions for this chapter.

Descriptive variables of the digital source

For the first chapter of this book,  the following assumptions are made:

The middle symbol  $($marked in the equation by larger character spacing$)$  refers in each case to the time  $t = 0$.

Characteristics of the digital transmitter

The  transmitter  of a digital transmission system has the task of generating a suitable transmitted signal  $s(t)$  from the  (Dirac-shaped)  source signal,  which contains the message of the source completely and is adapted to the characteristics of the transmission channel,  the interferences as well as all technical receiving equipment.  In addition,  the transmitter ensures the provision of a sufficiently large transmission power.

As a descriptive quantity for the transmitter,  we use the basic transmission pulse  $g_s(t)$.  Due to the definition of the source signal  $q(t)$  as a sum of weighted and shifted Dirac delta functions,  the transmitted signal can be represented with the amplitude coefficients  $a_\nu$  in the following way:

With a different basic transmission pulse,  for example

If the height of the basic transmission pulse  $g_s(t)$  differs from the maximum value  $s_0$  of the transmitted signal  $s(t)$,  we denote the pulse amplitude by  $A_{\rm S}$.  This is true for the Gaussian pulse,  for example.

The interaction module  Pulses and Spectra  shows some common basic pulses and the corresponding spectra. 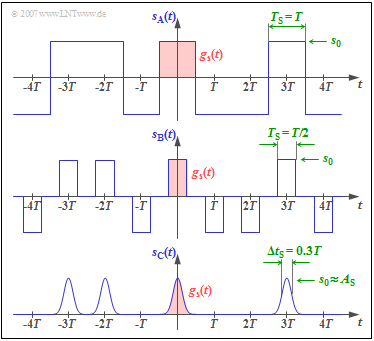 In the following descriptions, the bipolar NRZ square-wave signal  $s_{\rm A}(t)$  is usually assumed. The duration  $T_{\rm S}$  of the basic transmission pulse  $g_s(t)$  shown in red in the diagram is equal to the distance  $T$  between two successive pulses.

From the further diagrams one recognizes:


In the most general case, the following physical effects must be taken into account:

For this first main chapter,  $H_{\rm K}(f) =1$  is always assumed, which means that the first two points mentioned are excluded for the time being.

Thus, in the following, for the signal at the channel output always holds:

The simplest realistic assumption for the transmission channel of a message transmission system is  Additive White Gaussian Noise  (AWGN), as already stated in other $\rm LNTwww$ books,

The  AWGN model  can be summarized as follows:

We would like to refer you here to the three-part tutorial video  The AWGN Channel,  in which the AWGN properties are again clarified.

This receiver structure can be justified as follows:

The operation of the (binary) threshold decider is described in $\text{Example 3}$ below. 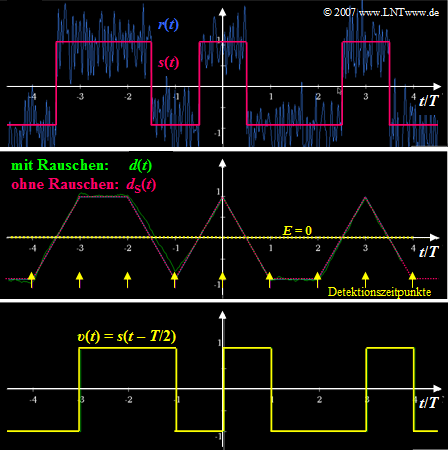 Signals in an optimal binary system

To this graphic it is to be noted further:

Equivalent circuit and prerequisites for the first main chapter

The following equivalent circuit is used as a basis for the further sections of this first main chapter: