We first assume the following conditions:

The removal of the DC component  $A_{\rm T}$  can be realized,  for example,  by a high-pass filter that allows all frequencies to pass unimpeded except for  $f = 0$ . 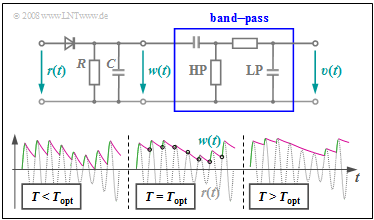 Principle of envelope demodulation in the time domain

The first circuit section – consisting of a diode and a parallel connection of a resistor  $R$  and a capacitance $C$  – performs the following tasks: 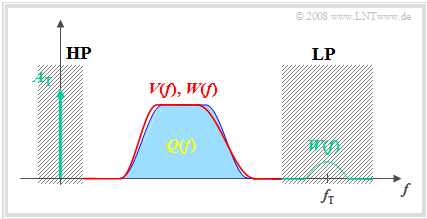 The graph on the right is intended to illustrate the operation of the envelope demodulator in the frequency domain. The spectrum  $W(f)$  of the signal  $w(t)$  at the RC parallel circuit differs from the spectrum  $Q(f)$  of the source signal as follows:

The first two signal distortions are eliminated by the high-pass and low-pass filters,  which together produce a band-pass. However,  there also remains a slight deviation between the sink signal  $v(t)$  and the source signal  $q(t)$  in the interesting range  $0 < f < B_{\rm NF}$,  as shown by comparing the output spectrum  $V(f)$  plotted in red and the input spectrum  $Q(f)$  plotted in blue.

Why does envelope demodulation fail for  $m > 1$? 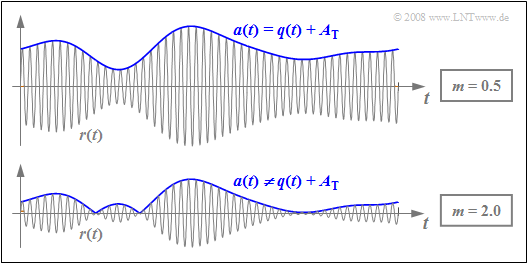 Here,  an ideal demodulation   ⇒   $v(t) = q(t)$  is possible with an envelope demodulator,  if we ignore unavoidable noise.

Especially when the source signal  $q(t)$  can be represented as a sum of several harmonic oscillations,  a signal description with the equivalent low-pass signal  ${r_{\rm TP}(t)}$  is extremely advantageous.  This is described in detail in the book  "Signal Representation".

$\text{Please note:}$  If noise/interference is disregarded,  the  »received signal«  can be written as:

This equation is valid for any form of amplitude modulation under different boundary conditions:

The time functions  $a(t)$  and  $ϕ(t)$  contained in the equations are identical for both representations:

In the case of double sideband amplitude modulation  $\text{(DSB-AM)}$,  the following holds for an ideal channel:

To quantitatively capture the nonlinear distortions due to a modulation depth  $m> 1$,  we assume the following scenario:

Based on the graphs, the following statements can be made: 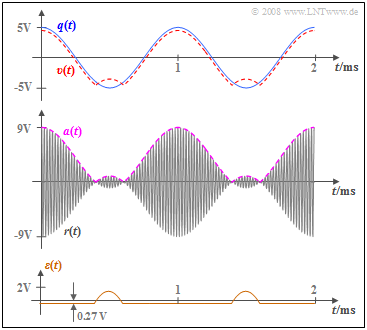 For the following considerations,  we assume the modulation method  "DSB-AM with carrier"  as well as a cosine-shaped source signal $q(t)$ . 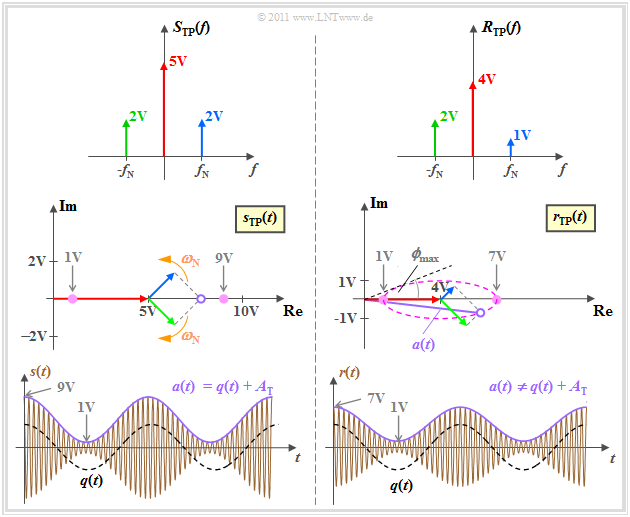 The graph shows,  in descending order

The left half of the image shows the transmitter and at the same time gives the conditions at the receiver for an ideal channel.

The right half considers asymmetrical distortions through the channel. 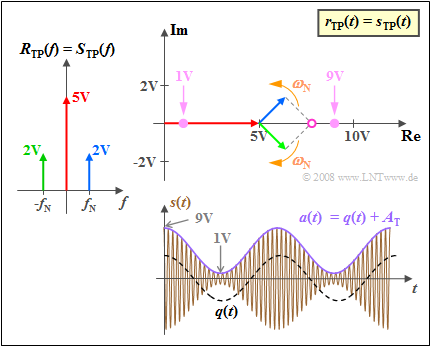 Envelope demodulation with an ideal channel

From these representations one can recognize:

$\text{Example 5:}$   Now let us consider the same graphs for a distorting channel where 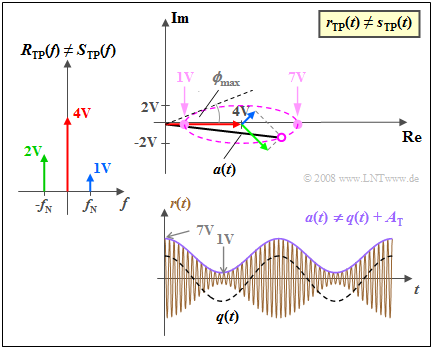 Envelope demodulation with a distorting channel

The graphs can then be interpreted as follows:

An important result of the last section was that nonlinear signal distortions occur in the case of asymmetric linear distortions in the channel.

We now assume the following: 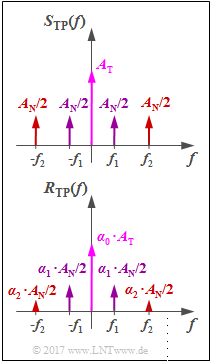 Spectra in the equivalent low-pass region

The graphic shows the spectral function of the equivalent low-pass signals of the transmitted signal and the received signal. From this picture,  the following statements can be made:

Based on the system configuration

we can now estimate the influence of additive white Gaussian noise. Distortions of any kind  – for example caused by an unsuitable channel or an imperfect realization of the modulator and demodulator –  are ruled out.

The graph on the right shows the sink SNR  $10 · \lg \, ρ_v$  for different modulation depths  $m$  as a function of the logarithmic performance parameter: 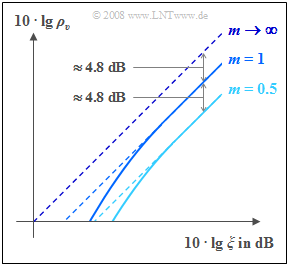 As already derived in the section "Investigations with regard to signal distortions",  the results for the synchronous demodulator in this double-logarithmic representation are

When envelope demodulation  $\rm (ED)$  is applied,  the following differences are observed:

Arguments for and against the envelope demodulator

On the other hand,  several reasons can be given in favour of the  $\text{synchronous demodulator}$  and against the envelope demodulator:

Exercise 2.7: Is the Modulation Depth Too High?